Previously, I told you that I don’t like Hills, and that I smell particularly foul. Coming in at number 3 on the list of things I hate about cycling: Terrible roads. 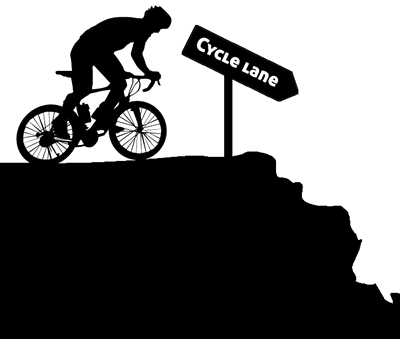 There are two issues that cause my blood to boil here: road layout, and road condition. Come with me for a moment, as you go on an imaginary cycle around Sheffield.

You hop on your bike, wobbling as you attempt to navigate around all the pot holes on your residential street. You make a turn, making it to the main road, where the road surface is heavily worn tarmac, with raised sharp pebbles showing through – the technical term for this type of road is a “tyregrater”.

Vibrating through that, you find yourself on a lovely smooth run of tarmac, and just start to get some momentum running… when you hit a series of speed bumps the width of the road, with nowhere for cyclists to skirt round them.

The incline increases, and soon you are in a speedy downhill, but immediately have to start braking heavily, because at the end of the road, the sharp hill ends suddenly with a traffic light, a traffic light that stubbornly remains red no matter how much you glare at it.

Then you turn left onto a cycle lane. The cycle lane appears to pass through several car parking spaces (with cars in them), a bollard and a set of railings. Its also on the edge of the road, where many uneven layers of tarmac over the years have combined to leave a craggy 45 degree slope. After a few minutes you come straight to a roundabout with cars racing round so aggressively that your death would have been certain, if you hadn’t just gone over a massive hole in the tarmac surrounding a drain cover and punctured both tyres.

You throw your bike in the nearest dumpster, and get on the bus.

While this is a (mild) exaggeration, I have actually had all of these experiences, and have several of them every time I hop on my bike. I hate feeling like a second class road citizen, but being on a bike, this is often the case.

My biggest bugbear with road layout comes in the form of cycle lanes. Renowned amongst seasoned cyclists for being unsafe, unrealistic and unhelpful, I generally tend to avoid them, at the same time resenting the money that is spent on them.

Warrington Cycle Campaign runs a Facility of the Month, which applauds, in a tongue-in-cheek manner, ridiculous, dangerous, deceitful and plain stupid cycle lane examples from all around the UK.

I have included my own submission, with a caption to accompany it below: 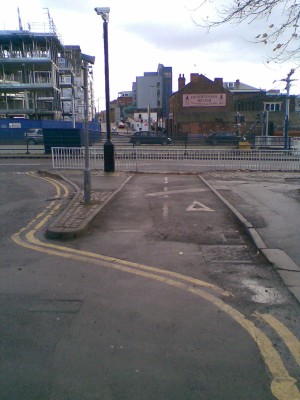 This delightful two way cycle lane, near the University in Sheffield, is a beautiful example of urban cycle planning. Located right next to one of the most dangerous roundabouts in the city, the track used to join the dual carriageway at right angles, leading to a distressingly deadly arrangement.

Happily, the city council obviously listened to feedback from cyclists, and helpfully installed some railings between the end of the cycle lane and the main road. Since this, there have been no reported accidents on this 3 metre track!

Is this because cyclists ignored the track from the beginning and just take the filter lane on the left, which gently and safely feeds into traffic? Or is it due to the visionary work of Sheffield City Council? I leave the decision up to you.

When it comes to road condition, especially in Sheffield, we have had some hard winters over the last few years, with a lot of freeze thawing, leading to many roads resembling a patchwork of repaired sections of tar. Unfortunately, lumpy road + inner tubes that are 3mm thick can only lead to one thing… but I will cover that in another post shortly.

The solution, on this occasion, is partly realistic, and partly less so.

Firstly, its time for the council to spend a lot more money on roads. Lets spend a few hundred million, and get some nice smooth roads. We’ll probably save the cost on petrol savings from the reduced friction. Well we won’t, but still, let’s do it.

Secondly, we need to change all the signs, so that cycle lanes become “car lanes”, and the bikes are given the sole licence to ride on the rest of the roads. Absolutely guarantee you would see a lot more cyclists around!

4 thoughts on “Five things I hate about cycling: Terrible roads”