Previously, I told you that my fifth biggest hate about cycling was Hills. Coming in at number 4 is: Sweating, and the need to shower. 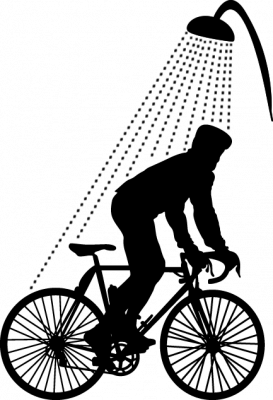 So why is that you ask? First off, if you aren’t male, you may not be aware of the scale of the problem. A 2006 study showed that if you exercise 14 fit men for an hour and a half, they will produce nearly 16 litres of sweat between them. As a comparison, your average bucket is about 9 litres. Men literally are capable of sweating buckets.

This wouldn’t be a problem if our society wasn’t so discriminatory. One side effect of civilisation, it appears, is that there is no such thing as sweaty professionalism. Apparently the ideal businessman does not have wet patches back and front of his suit, and it seems that most people don’t want their doctor to be dripping whilst they examine you.

Unfortunately, on the scale of sweatyness, running from 1 (A rock) to 10 (Really old Brie, wrapped in socks, in a plastic bag, in monsoon season), I hit about a 9: I am definitely a sweat monster, especially when I have to deal with hills.

This all ends up frustrating me, since I can rarely use cycling to replace my normal mode of transport without knowing that I have somewhere to change afterwards. It means that I have to pre-plan every trip, often having to check out new locations at least once before I can cycle it.

Replacing a 10 minute car trip becomes rather impractical, since it becomes a 30 minute cycle, followed by a 10 minute hunt for showers, and 20 minutes making myself look presentable. And when the showers are locked/being replaced/filled with stacked chairs – all of which have happened to me – it can be a real problem.

A few years ago, I cycled 7 miles to work, only to realise I had forgotten my suit! It is hard to express the extreme misery I felt inside when I realised that I was going to have to cycle all the way back home, grab a suit, drive in and be an hour late for work into the bargain. If I could have cycled in a suit without fear of drowning, this problem would go away.

This brings me onto my solution for Sweating – compulsory laser treatment for all men, coupled with a readjustment in the attitudes of society toward odour. Sorted.

5 thoughts on “Five things I hate about cycling: Sweating”