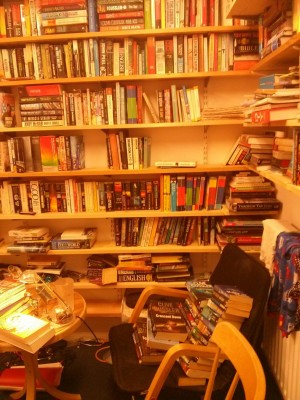 I’m an avid reader. Crazy about it. I have tons of books – this is a chaotic snapshot of my library, mid alphabetisation. I especially collect books by Clive Cussler and Robert Crais. Don’t ask me why, but I do. I’ve listed them below (the ones in bold I own). Feel free to buy me any that I’m missing…

Clive Cussler essentially writes the same book, over and over again. It’s basically James Bond, based in America, with a high focus on underwater exploits.

For the first 20 years, Clive Cussler used a character called Dirk Pitt exclusively in the “good guy” role. Unfortunately, by the time Dirk was 50, it became a bit more unlikely that he would be on the front lines.

Cussler then came up with the ingenious idea of Dirk having a son he never knew about, also called Dirk Pitt, who looks identical, and is also a marine engineer, who randomly appears in the last 3 pages of one of the books. Terrible story writing – imagine doing that in a school creative writing project, let alone a multi-million bestseller – but in effect allows Pitt to live on forever, which I’m cool with. Recently he has come up with a few more characters who are all great, but all also basically just Dirk Pitt again.

Robert Crais writes excellent crime fiction. I’ve never read anyone who quite captures sarcasm in written prose so well: the majority of his books are entirely in the first person. His lead character is a sassy PI called Elvis Cole, whose self deprecating take on the world belies his compassionate interior. He’s also hard as nails.

With a nod to classic film noir, captivating descriptive language, and an intelligent understanding of how people tick, I’m always keen to read a Cole Novel…