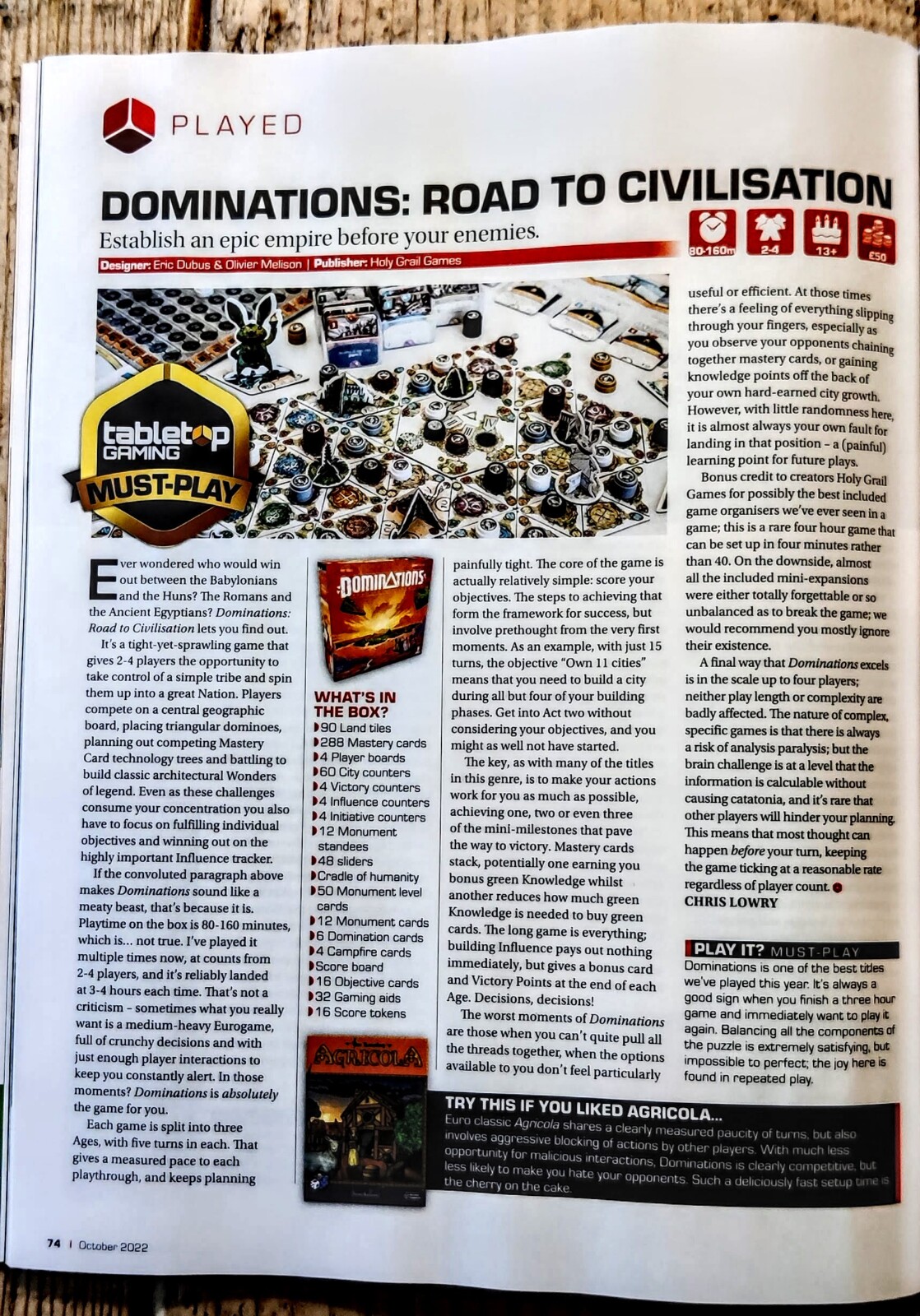 Establish an epic empire before your enemies.

Ever wondered who would win out between the Babylonians and the Huns? The Romans and the Ancient Egyptians? Dominations: Road to Civilisation lets you find out.

It’s a tight-yet-sprawling game that gives 2-4 players the opportunity to take control of a simple tribe and spin them up into a great Nation. Players compete on a central geographic board, placing triangular dominoes, planning out competing Mastery Card technology trees and battling to build classic architectural Wonders of legend. Even as these challenges consume your concentration you also have to focus on fulfilling individual objectives and winning out on the highly important Influence tracker.

If the convoluted paragraph above makes Dominations sound like a meaty beast, that’s because it is. Playtime on the box is 80-160 minutes, which is… not true. I’ve played it multiple times now, at counts from 2-4 players, and it’s reliably landed at 3-4 hours each time. That’s not a criticism – sometimes what you really want is a medium-heavy Eurogame, full of crunchy decisions and with just enough player interactions to keep you constantly alert. In those moments? Dominations is absolutely the game for you.

Each game is split into 3 Ages, with 5 turns in each. That gives a measured pace to each playthrough, and keeps planning painfully tight. The core of the game is actually relatively simple: score your objectives. The steps to achieving that form the framework for success, but involve prethought from the very first moments. As an example, with just 15 turns, the objective “Own 11 cities” means that you need to build a city during all but 4 of your building phases. Get into Act 2 without considering your objectives, and you might as well not have started.

The key, as with many of the titles in this genre, is to make your actions work for you as much as possible, achieving one, two or even three of the mini-milestones that pave the way to victory. Mastery cards stack, potentially one earning you bonus green Knowledge whilst another reduces how much green Knowledge is needed to buy green cards. The long game is everything; building Influence pays out nothing immediately, but gives a bonus card and Victory Points at the end of each Age. Decisions, decisions!

The worst moments of Dominations are those when you can’t quite pull all the threads together, when the options available to you don’t feel particularly useful or efficient. At those times there’s a feeling of everything slipping through your fingers, especially as you observe your opponents chaining together mastery cards, or gaining knowledge points off the back of your own hard-earned city growth. However, with little randomness here, it is almost always your own fault for landing in that position – a (painful) learning point for future plays.

Bonus credit to creators Holy Grail Games for possibly the best included game organisers we’ve ever seen in a game; this is a rare 4 hour game that can be set up in 4 minutes rather than 40. On the downside, almost all the included Kickstarter exclusive mini-expansions were either totally forgettable or so unbalanced as to break the game; we would recommend you mostly ignore their existence. (NB. There are several full release expansions available too, Dynasties, Hegemon, Provinces & Silk Road, which we haven’t played yet, but suspect will be much better balanced).

A final way that Dominations excels is in the scale up to four players; neither play length or complexity are badly affected. The nature of complex, specific games is that there is always a risk of analysis paralysis; but the brain challenge is at a level that the information is calculable without causing catatonia, and it’s rare that other players will hinder your planning. This means that most thought can happen before your turn, keeping the game ticking at a reasonable rate regardless of player count.

PLAY IT? MUST PLAY

Dominations is one of the best titles we’ve played this year. It’s always a good sign when you finish a 3 hour game and immediately want to play it again. Balancing all the components of the puzzle is extremely satisfying, but impossible to perfect; the joy here is found in repeated play.

TRY THIS IF YOU liked Agricola…

…Euro classic Agricola shares a clearly measured paucity of turns, but also involves aggressive blocking of actions by other players. With much less opportunity for malicious interactions, Dominations is clearly competitive, but less likely to make you hate your opponents. Such a deliciously fast setup time is the cherry on the cake. 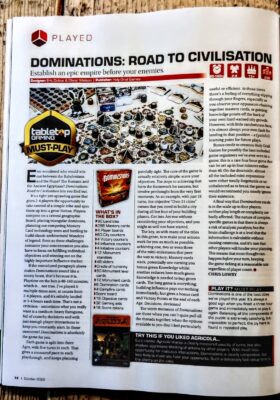