Man, I stayed up all night watching this. You can read about the hung parliament and all that yourself on the BBC election site.

Basically though, in summary, no one party can get a full majority, so there are two options: a coalition of two or more parties, or another election at some point.

My vote is on a Lib Dem and Labour coalition. It’s not looking good, as Nick Clegg has said that the party with the most MPs (Conservative) should get the first opportunity to attempt to form a government. I respect his integrity with sticking to PR ideals; but that is not the current law. Just as I don’t think he should be allowed to say “I got 23% of the vote, thus I deserve 23% of the MPs”. If there is a referendum, and our constitutional system changes, then that’s fine. Until then though, we need to respect the current law.

But yes, at the moment, with the only real statement we have to work with is Clegg’s support for the party with the largest mandate to try first, we don’t know if there is going to be a Lib Dem Conservative coalition. I think it would be a mess, since there would have to be so many compromises, that neither Tory nor LD voters and MPs would be satisfied with the resulting government.

The only real sensible merger is Lib Dem and Labour; they share a lot of common ground, especially with regard to reform, whereas LD and Tory are completely opposite on that one.

The questions are – can it work, and how will they get the extra few MPs they need for a majority? And will they ditch Brown? It would be reasonable for Clegg to say, I’ll only work with Labour if Brown is off the table. Anyway, this will unfold throughout the day, so keep watching below.

My favourite two things I have read on twitter over the evening (whole night) have to be: 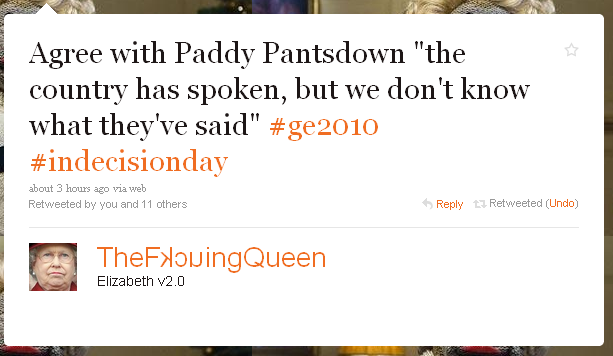 Maybe more later, but for now I’ll just leave you with the latest stuff below: