I have long been a huge fan of the graphics program Adobe Fireworks, despite the lack of support it gets from its owner, and the bugs which plagued the last version. The new version has just been announced, so I just downloaded the trial of Fireworks CS5. I am considering purchasing it, despite the slightly ridiculous increase in price.

There are none of the new features I hoped for: especially custom brushes, or the ability to make tables, rather than lining up hundreds of text boxes, have not arrived. We have recieved a few tweaks here and there, but mostly we have been promised 900 bug fixes, stability improvements and better speed. 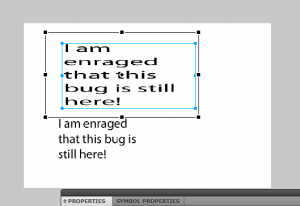 I can cope with that. Fireworks CS4 without the terrible text bugs will be fine thanks.

So I just started playing around, and decided to resize some text. I. Can. Not. BELIEVE that I just got the exact same bug that plagued CS4 – Ctrl+T resize of text, causing crazy distortions. Picture on the right.

This is on a brand new file, not imported from anywhere else, just a blank file, with two text boxes and Ctrl+T. Absolute fail.

Adobe, what the hell is going on?

Just to clarify to any Adobe tech people, this is on Fireworks CS5 installed on Windows XP, with 2gig ram (its having no trouble running it). The error is reproducible simply by creating a new file, creating a text box, and then resizing it using Free Transform (Ctrl+T), and dragging the corner arrow, which should be “scale with constrained proportions”.

Seriously, I absolutely demand a response to this. It just isn’t on! Us PC users still haven’t had the promised patch for CS4 yet, and now CS5 is causing the same problems! I have replicated the error in another file, visible below. You can also download the raw bug.PNG file here.