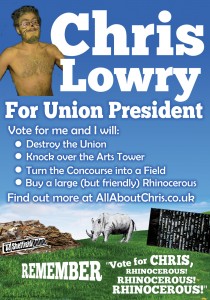 Chris Lowry has been an active member of Union politics for more than 1 years, serving on the Welfare committee for most of 2007 and 2008. Since then, he has taken a more relaxed approach to the Union, rarely visiting and generally not even bothering to vote.

He does, however, frequently still get himself free cups of tea from the Officer’s private kitchen. Aside from this, he is a medical student, web designer, punk band frontman and pretty big fan of Jesus.

Finally, if you didn’t work this one out yet, Chris has a big sense of humour, and along with Raj, we are trying to raise awareness of Union politics by encouraging people to laugh, take interest, and thus vote!

The rest of this space will be used to tell you all about the world’s best animal, the Rhinocerous:

Often shortened to “rhino”, its a name used to group five species of odd-toed ungulates in the family rhinocerotidae. The rhinoceros family is characterized by its large size, reaching one ton or more in weight; herbivorous diet; a thick protective skin; relatively small brains for mammals this size (400–600g); and a large horn. They generally eat leafy material, although their ability to ferment food in their hindgut allows them to subsist on more fibrous plant matter, if necessary.

The rhino is prized for its horn. The horns of a rhinoceros are made of keratin, the same type of protein that makes up hair and fingernails. Both African species and the Sumatran Rhinoceros have two horns, while the Indian and Javan Rhinoceros have a single horn. Rhinoceroses have acute hearing and sense of smell, but poor eyesight. Most live to be about 60 years old or more.