The following post is from a series of emails I wrote to my girlfriend at the time, whilst on a trip to Africa. She is now my wife, so I did something right.

In the aftermath of the meeting last night, combined with my birthday, I decided I deserved some celebration. I had custard slices with everyone from work, washing it down with Tab (basically diet coke).

I also finished editing Brian. Only got two more tracks to do, hopefully both going to be finished tomorrow.

In the afternoon I, finally, went online – although I can’t find my USB stick, so I couldn’t upload these lol. I tried to sort out what I’m doing for the websites – I think I have a plan now, so that’s good. Also looked into how to register Tshwaranang as a charity in the Uk – I think we need to have an income of more than £5,000 a year, which I don’t see happening any time soon.

In the evening, Tony and Trina Marshall had invited me round for dinner. Trina’s full name is Katherine; Trina is a nickname, based on KaTeRINA. Would you like me to call you that instead of Kat? Thought not…

Anyway, I had told Tony in the morning that it was my birthday, and asked if I could bring Mohau. He was happy to let Mohau come too. When we turned up, I was suddenly aware that I was wearing basketball shorts, and a tshirt with a comic printed on it. Feeling underdressed, I knocked and entered; to find out that as a surprise, we were going out for a meal at a restaurant! I then felt even more embarrassed, and went on throughout the evening to embarrass myself further.

Since no one in Harrismith is vegetarian, the veggie option on the menu was basically “Some cooked vegetables”; the kind of thing that drives me mad in the Uk. Happily though, here I am not restricted to such a lacklustre selection, I was able to choose meat things. Trying to be polite, I asked if anyone was having a starter. I got the impression that a few people were, so I ordered a Free State salad as a starter, requesting that I have a very small portion, just a side, since it was a starter, and then ribs for main, noticing there were two sizes on the menu, and happily resisting the option of choosing the large, sticking with the standard.

So my starter came. On its own. I was the only one with a starter, and I looked like a big fatty. Then I looked at it. It clearly was not a smaller version; there was enough food for it to be a main. Plus, the term salad was misleading; it was a beef and potato wedge meal, with a few bits of lettuce, and some gherkin. I pleaded with Mohau to help me, though he refused, and eventually got more than half of it to take away as a doggy bag. I had hurried, and felt anxious, because everyone was waiting for me.

Finally it was taken away, and the mains came. And yes, they had assumed I would want the large, and so yes, the ribs were the largest plate on the table. And, of course, they were the messiest. I ate as fast as I could, trying not to keep everyone waiting again, whilst also trying not to get BBQ sauce anywhere near my hands or face, horribly conscious of how smart everyone was, and how neatly they were eating, whilst buffalo boy was feasting away, elbows on the table, hands in his food, slurping down his meal and throwing the bones behind him, slobber dribbling down his face, and mingling with the ladles of sauce splattered round his mouth, and all over his shirt.

Needless to say, by the end of the meal I was absolutely stuffed, emotionally drained, and frankly exhausted. I slept well!
A verse to put birthdays into context:

“We’re all adrift in the same boat: too few days, too many troubles. We spring up like wildflowers in the desert and then wilt, transient as the shadow of a cloud. Do you occupy your time with such fragile wisps? Why even bother hauling me into court? There’s nothing much to us to start with; how do you expect us to amount to anything?”
Lovely bit of Job 14:1-4 there!

You my lovely bum!
xC 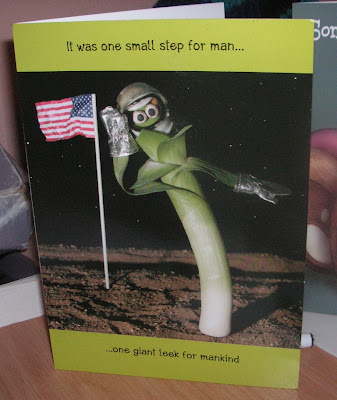 PS. The card was nice. Someone else got me this one, which I brought 7,000 miles with me to open also: