Lockdown made me realise many things. One of them is that I love playing board games with people, yet don’t make the time to do it enough, as well I enjoy playing online casino games from https://online-casino-canada.com.

As a result, I’ve started a weekly board game night! I last had one of these back in Boston – check out some of my posts from back then – and I’m excited to get back to it.

Of course I’ve made a Risk Map specifically for our town of Warrington. See it below, or click here for an full size printable version… 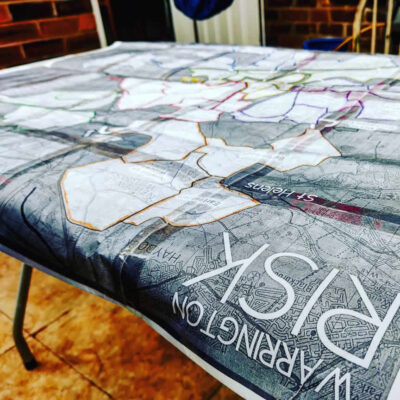 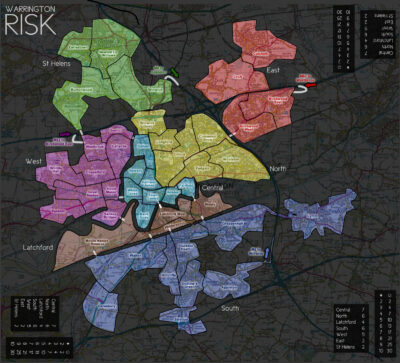 We played outside due to ongoing Covid-19 rules, which for evening in April was not as cold as you might have expected. The two fan heaters certainly helped!

For those of you who haven’t played Risk, it’s a Napoleonic Conquer-the-World style game, with really simple rules, and the ability to break lifelong friendships over political fragmentation. You get extra armies each turn for holding territories, and a bonus for holding an coloured area (see the key in map above for bonuses). 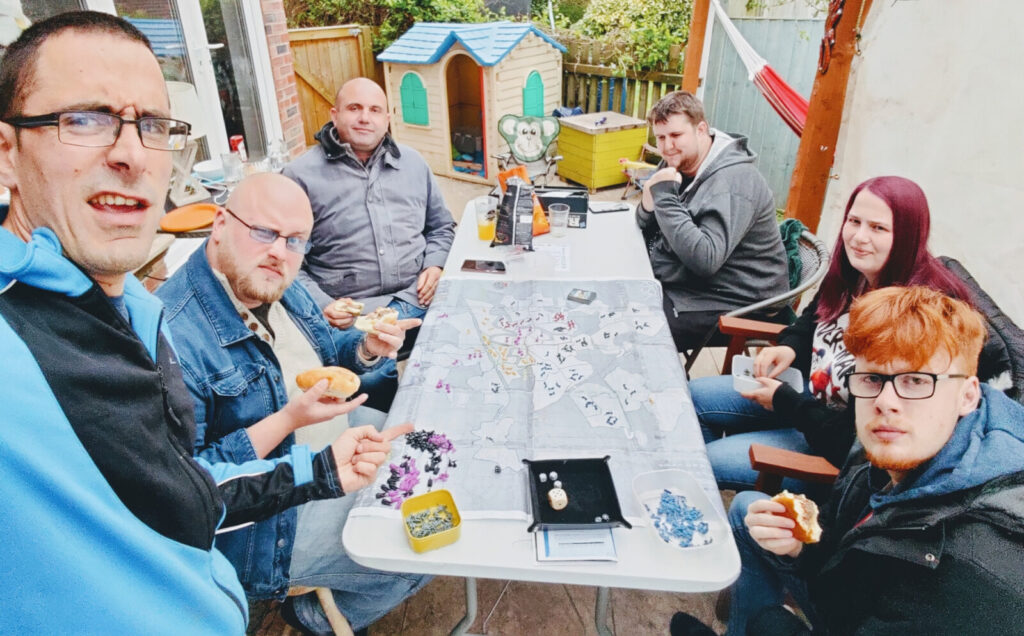 It begins with all 6 of us in the daylight. At the back right, you can observe Josh already readying evil machinations. 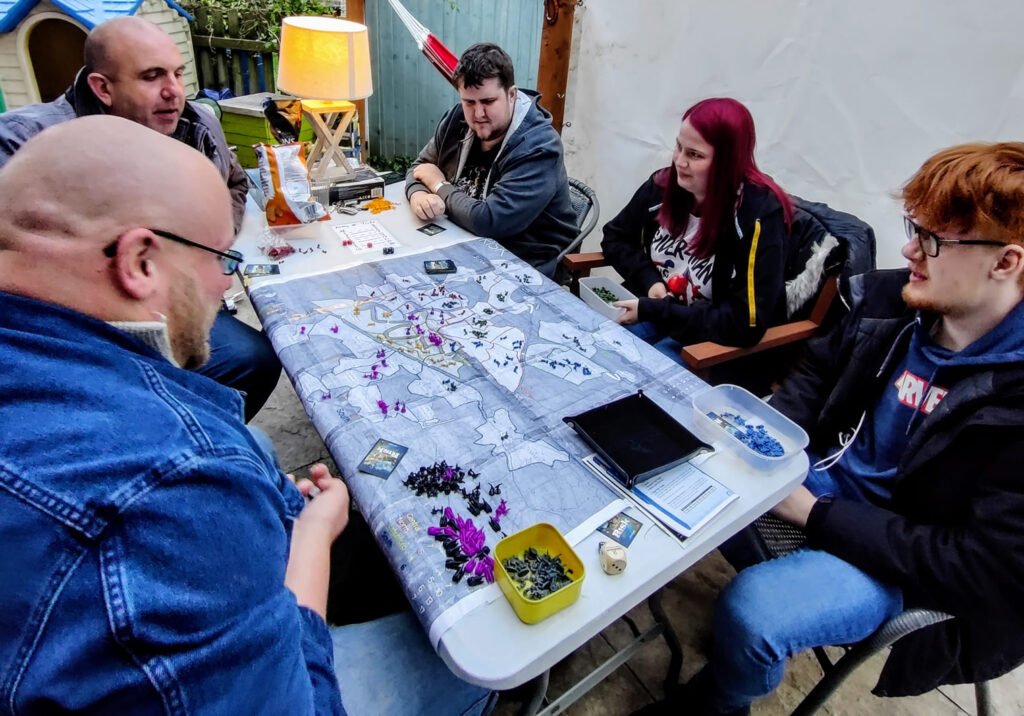 Note how we foolishly let Josh (Yellow) have the whole of the brown Latchford area during setup. This was a poor decision on all our parts, and one that eventually doomed us all. 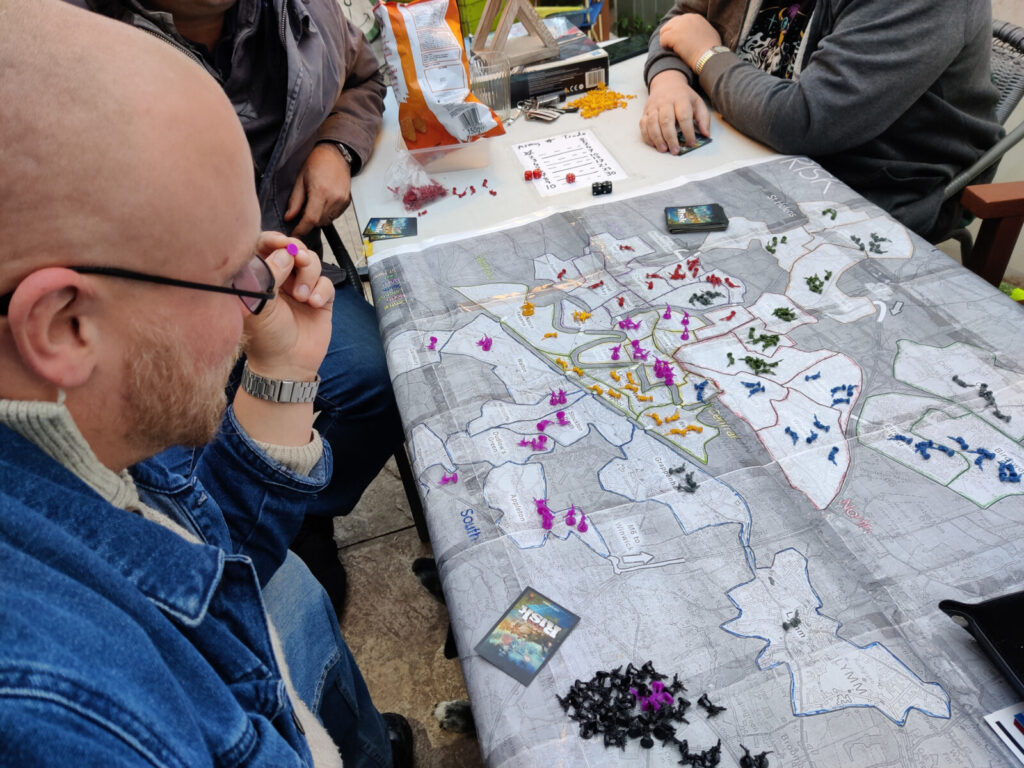 To be fair, the “Josh threat” was noted early on. A strategic alliance between me (Grey) and Eddie (Pink) relied on his reinforcement of Stockton Heath, and mine of Grappenhall, to enable a joint attack on Josh (Yellow). Here, Eddie is considering the practicalities… 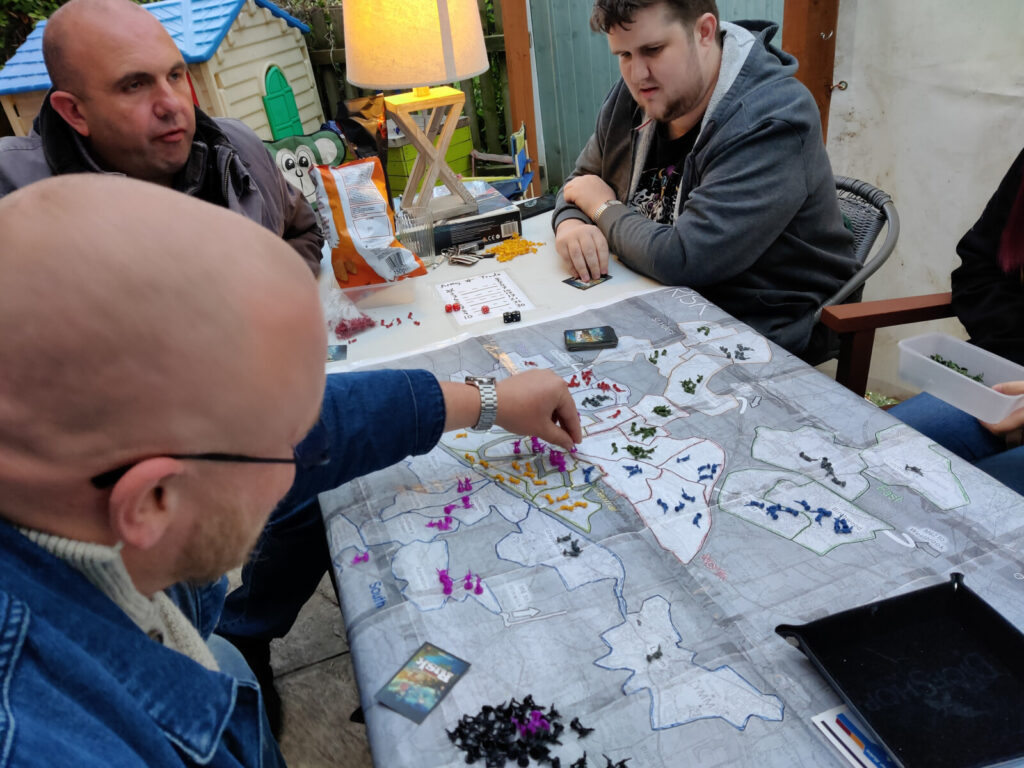 …before placing his armies in Central and completely abandoning any pretence at following through with our Alliance. This did not stop him making regular, empty, hope-crushing promises to me for the rest of the game.

In these early turns Jess (Green) and Callum (Blue) slowly carved out strongholds in the North and East areas, whilst Peter “Quisling” Clarke (Red) allied with Overlord Josh and nestling in the safe bosom of West.

Although there were some scuffles – Dallam changed hands about 8 times in the course of the game – most of us tried to bunker down and avoid poking the dragon. Here Pete is explaining how as far as he’s concerned Josh can kill everyone else in the whole of Warrington as long as Great Sankey is left alone. Charming.

And where am I at this point? Splintered to the edges of the map, Grey is already an irrelevance. 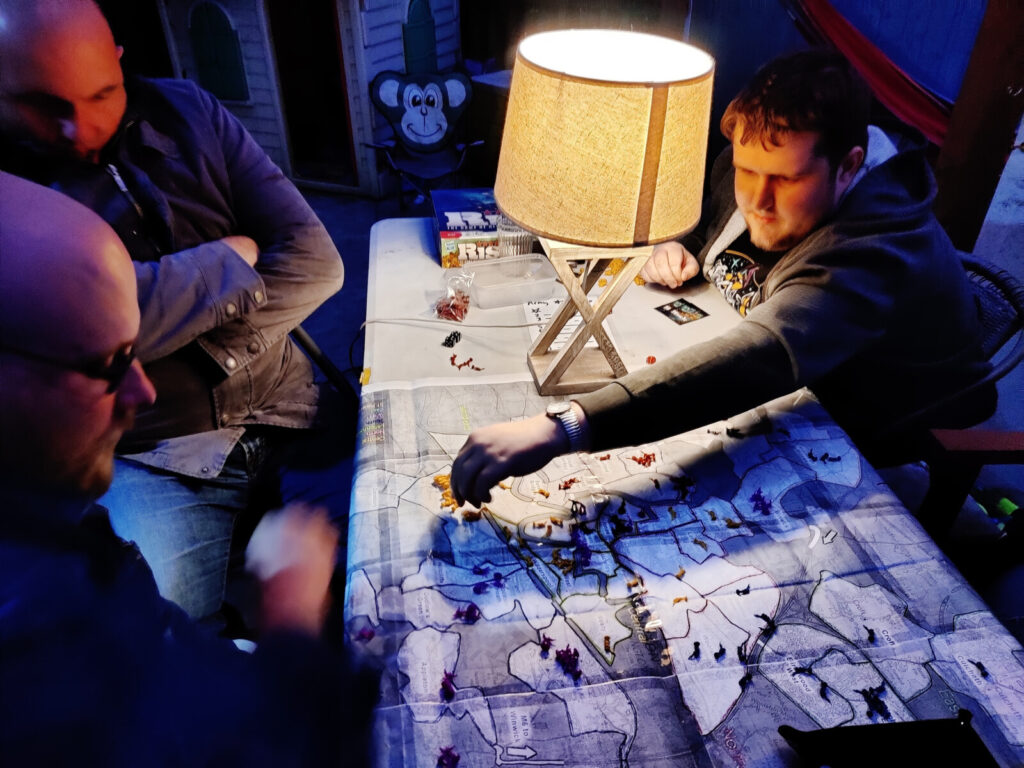 After devouring Jess, taking all her cards, and dumping a ludicrous 30 armies onto the board, Josh is crossing the Manchester Ship Canal with fire in his eyes! Pete averts his eyes, deeply conscious that he is an enabler. Eddie leans over to me and promises that this will be the moment he delivers on our alliance… 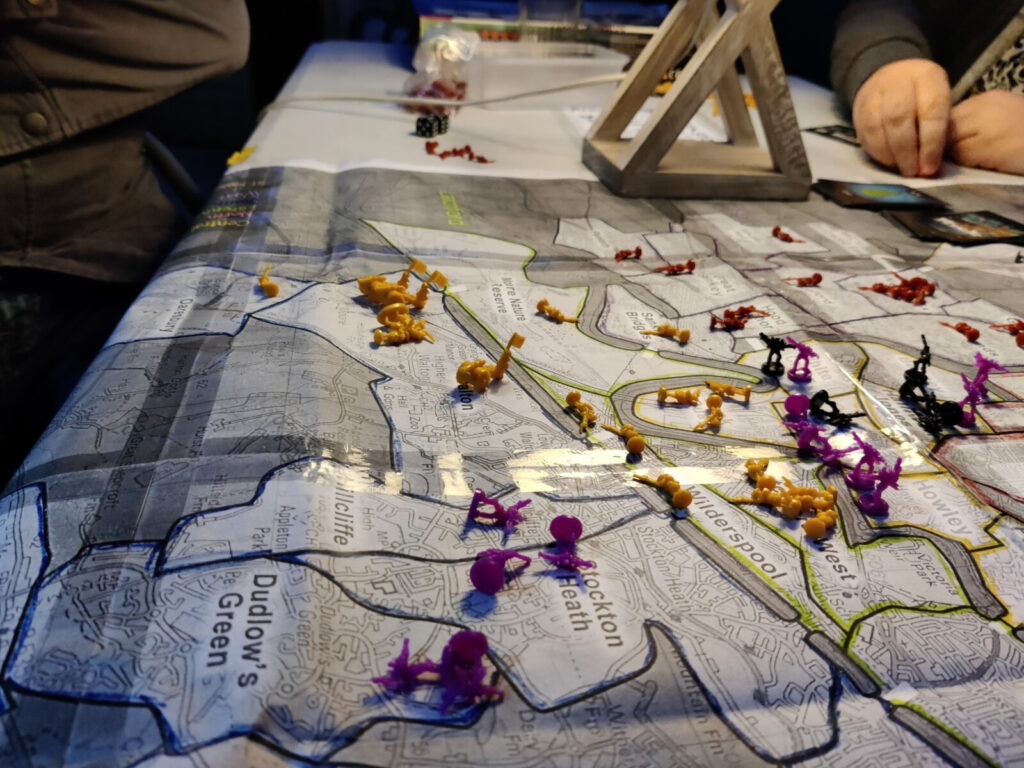 …emptily. Any action on his part proves impossible, as Josh embarks upon Hillcliffe with 35 Yellow armies at his disposal, against Eddie’s 7 Pink soldiers. 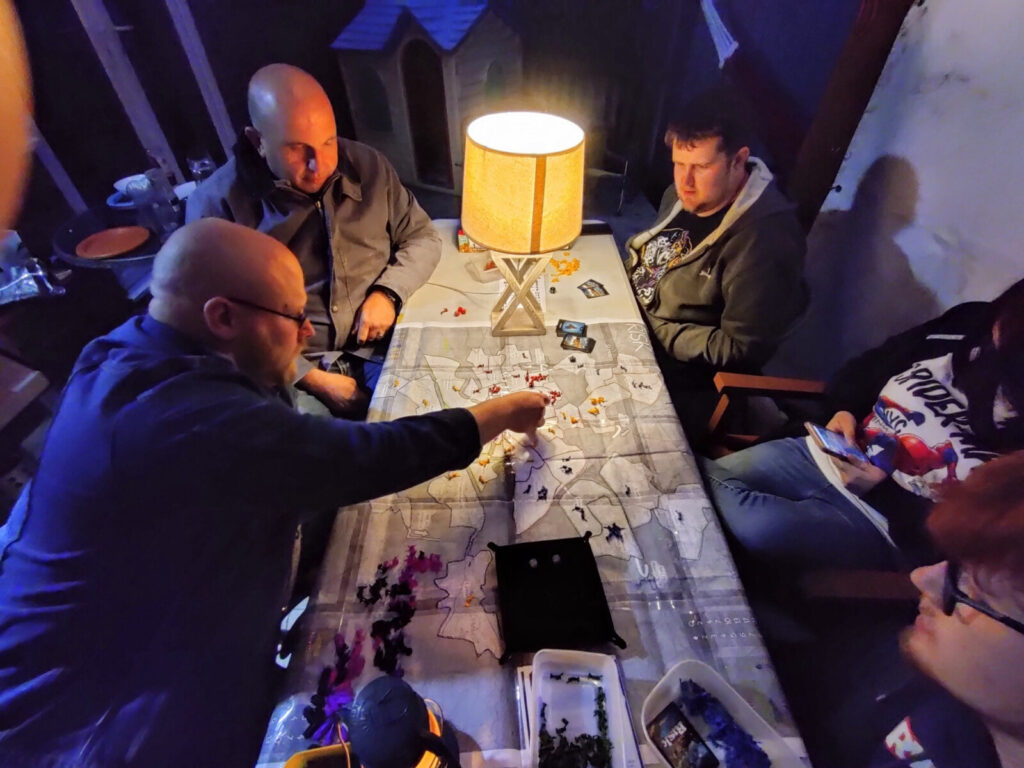 The South lost, Latchford and Central unattainable and North rapidly losing any hope, Eddie readies for a pyrrhic last stand… 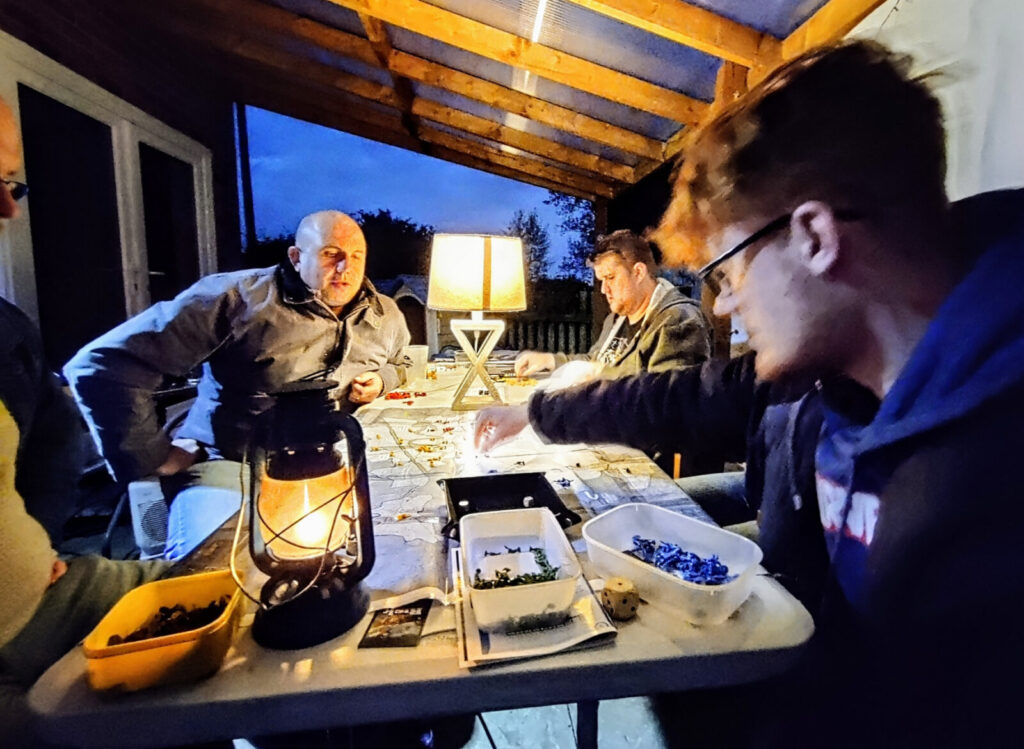 …whilst Callum trades in every card he has earned so far for massed Blue reinforcements! Counterattacking the imperial Yellow might of Josh’s hordes? Could this be the turning point of the game?! 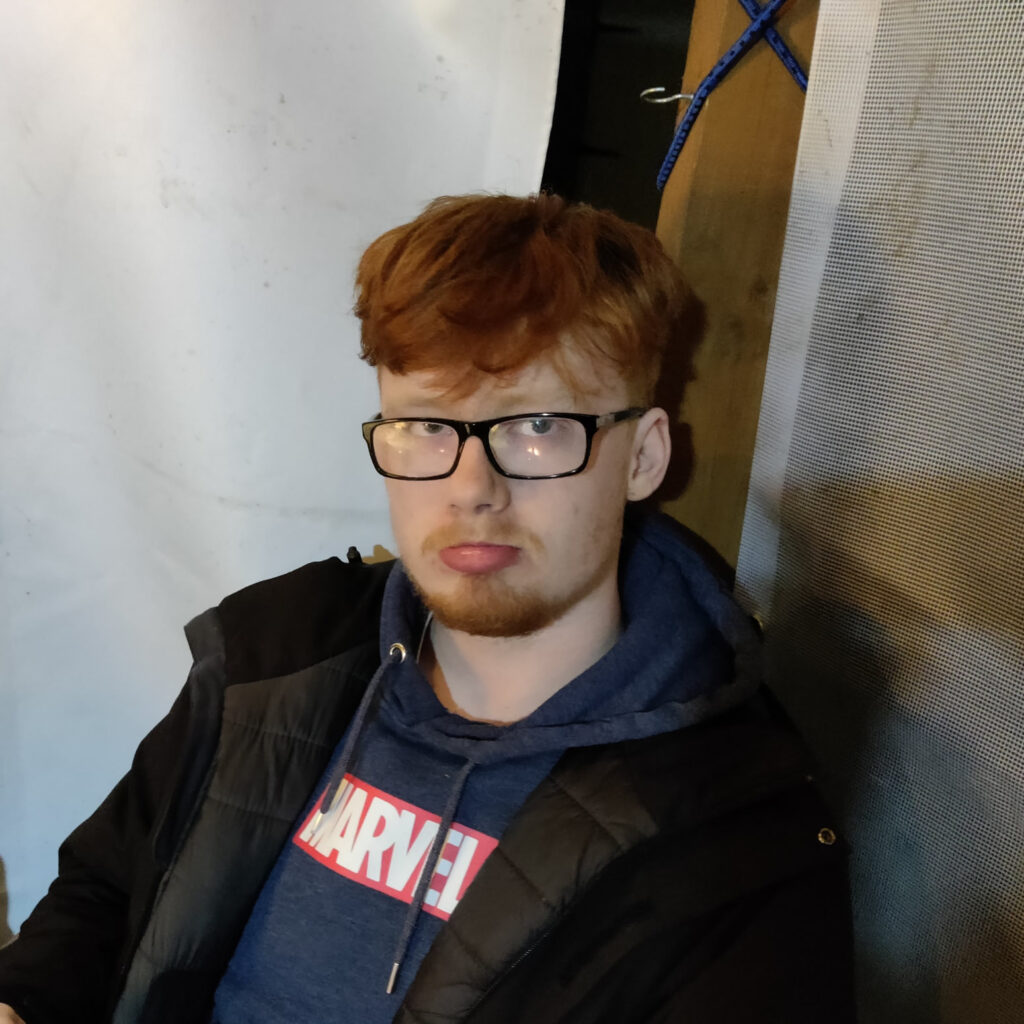 …only for 4 Yellow armies to hold against 18 Blue ones! With the shattered remains of two armies in place, Josh proceeded to macerate both Eddie’s Northern remnants and the Birchwood stronghold of Callum. Look at him here. Crushed, the poor lad. 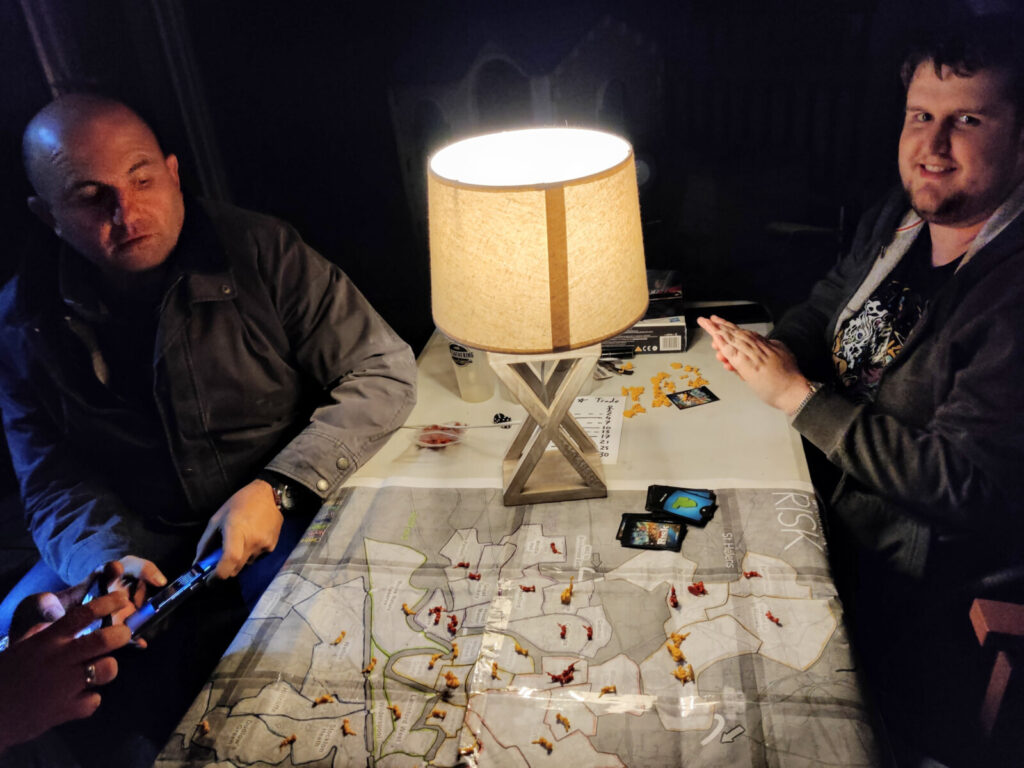 Pete “The Red Enabler” Clarke sits content in 2nd place, quietly satisfied to hang onto the coat tails of the victor. Overlord Josh rubs his hands, savouring the enormity of the Yellow Empire, and the delicious, needless blood he has shed during its consecration.

A fun night, although next time there’s no way I’ll let anyone take Latchford! 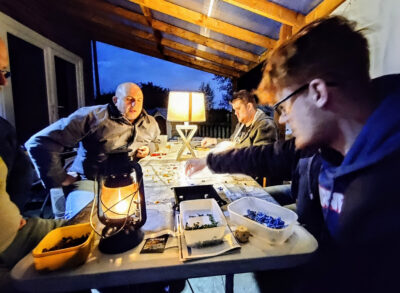