Meeting on sporadic nights in and around Boston, we get to try out various exciting new games. All games are fully explained by experienced board gamers, and beginners are welcome. Looking for the best android games to play this year? This article has the information you need.

After missing a month revising for my big scary GP exam final, I was keen to make up for it with an evening of calculated victory… 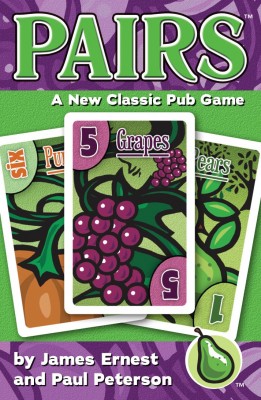 Pairs is a great little card game, perfect to pick up in about 2 minutes, and immediately leads to countless moments of groaning, and fraught decisions.

It has a simple premise: avoid getting a pair. The deck is made of numbered cards – there is one card labelled 1, two cards labelled 2, three labelled 3… all the way up to ten cards labelled 10.

You are both dealt one card to start, and then take it in turns next, either deciding to take another card, or wimping out and folding. If you draw a pair, the number of that pair is added to your score. If you fold, your lowest number card is added to your score. First person to a certain number, depending on player numbers, loses.

As an example, let’s watch some Hobbits playing…

Bilbo feels fairly confident – another 3 isn’t likely to come up, although 8 is fairly common. He takes another card, he now has 3, 7 and 8.

Frodo is a little more concerned, as 6 is moderately common, and 10 is very much so. However, folding would give him a score of 6, so he takes another card. He now has 6, 9 and 10.

Bilbo takes another card, after deliberating whether or not to fold and keep the 3 for his score. He now has 3, 7, 7 and 8. He got a pair of 7s, so the round is over, and his score is now 7.

Frodo is relieved, since he would have probably chosen to fold next turn. As he didn’t fold, his score remains 0, and he is in the lead. The next round begins…

Nick and myself played a few rounds of Pairs whilst we waited for the more temporally retarded members of the group. It became immediately clear that Nick secretly moonlights as a Vegas card shark, since he started counting cards on our very first run through. However, there’s enough luck that you can never be sure of any decision, and it certainly passed 20 minutes quite happily… 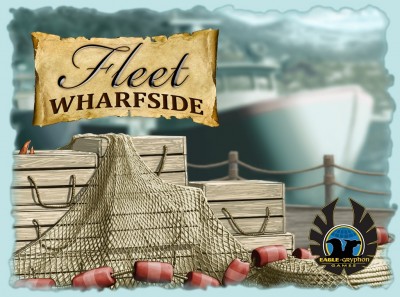 You are a fish trader with two options: visit the wharf (docks) and pick up some fish/crustacean cards, or visit the market and pick up contracts to sell the fish.

There are no negative scores for unfinished contracts or fish in your hand – its a simple thing, but it definitely takes the pressure off a bit.

A recent Kickstarter purchase by Craig, it was a nice moderate intensity game to kick off the evening. They played it last week, and felt the King Crabs didn’t add much. However, my royal shellfish earned me around 10 points on their own. When the final scores were tallied up, I won with 55 points, closely followed by Craig at 50, then Nick and Simon trailing somewhat behind. KC For The Win! (tshirts pending…)

Not a game I’ll rush out to buy, and a little light on player interaction, but I’d be happy to play it a few more times, for sure. 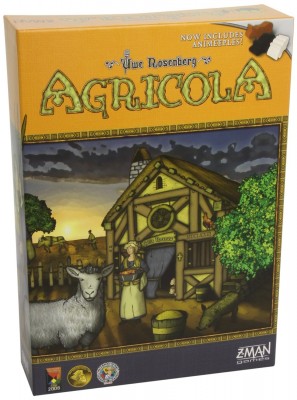 Playing Coup last month was a moment where I finally got my hands on a game I’ve heard loads about but never played. That crown has been thoroughly stolen with the legendary “King of Eurogames“: Agricola.

There’s too much detail to cover here, but I’m going to try to do it in 10 steps:

I can see why gamers love this game. Chance plays just enough of a part to keep things fresh, but not enough to hold back great strategy. Interaction isn’t very direct, but when you only have two actions, and the player to your right takes ALL THE WOOD JUST BEFORE YOU WERE ABOUT TO… its fair to say there is a reasonable amount of competition present throughout gameplay.

Who won our game? Obviously Craig did. Craig with his vegetables, and 6 stone houses, and his pigs and his cow and his army of little Craigs somehow feeding themselves despite the sheer impossibility of that task.

I really enjoyed Agricola. I spent quite a lot of today thinking about how I’d play differently, if it would be possible just to focus on one task, on having thousands of fences, and hundreds of sheep, or having a huge field brimming over with corn.

So, in conclusion: Craig got more points than everyone else added together, but it probably doesn’t count because he smells faintly of cabbages. Agricola is awesome. Spending time with friends and playing board games is, as ever, brilliant. And that, at nearly midnight, was that.

Feel free to drop a comment below, or check out the posts from November and December. Don’t forget to visit the facebook group! 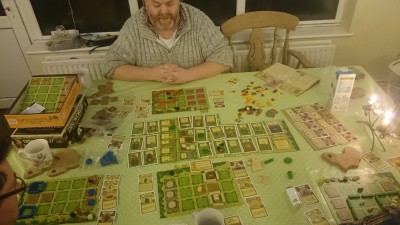 2 thoughts on “Board Games in February!”