The Government, and Jeremy Hunt, have said they will impose the new Junior Doctor contract.

In so doing, they continue to demonstrate their disappointing lack of respect for the commitment and intelligence of the 53,000 junior doctors who work for the NHS, not to mention the 377,000 nurses, 97,000 senior doctors and 74% of of the general public who seem to understand that if we lose significant numbers of juniors, the whole system will collapse…

So, what’s next? We could get all angry; but we have a responsibility as doctors. We have a duty to remain professional, to protect patients, and to save the NHS. We want to prevent damaging, poorly thought out reforms, whilst holding strong to the cornerstone of modern medicine: evidence based practice with patient care as a priority.

Action One: Give them some evidence.

There are three simple things we can do to make the Government see the scale of the problem. None of these will cause you trouble with your training, and most importantly, none of them will impact on patient care. 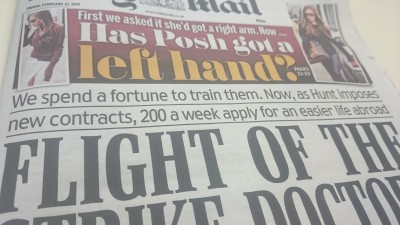 Firstly, go online and apply for a GMC Certificate of Good Standing. This is the form you need for working in another country. It’s simple and free to do, just visit GMC online.

Even if you are not currently planning to leave the country, it gives you faster options if the situation worsens, doesn’t commit you to any action, and demonstrates a potential intent to leave. 200 JDs getting a certificate each week makes headlines (see right). Imagine the news that 98% of junior doctors are considering on leave the country?

Next, my dear colleagues, its time to actually fill in those breach forms. I’m not talking about one annoying F1 kicking up a stink. I’m talking about the 10,000 unpaid hours we logged in 5 days in October. Of course we can’t work to rule – we all feel pressured into working extra hours by our caring attitudes and the low staffing levels: leaving work on time would put patient safety at risk.

However, a BMA coordinated hospital-by-hospital submission of breach forms daily from every ward gives clear evidence of how hard we already work. Put patients first and work late unpaid – most of us regularly do – but let’s let everyone know about it!

Warn them you are thinking about quitting. We need a BMA sanctioned letter for us each to send to our training deaneries, line managers and rota co-ordinators, along the lines of “I am writing to warn you that I am incredibly concerned about the actions of the Government in imposing a new junior doctor contract. We are concerned that the new contract is not evidence based, and comprises a significant risk to the stability of the NHS. In solidarity with many of my colleagues, I wanted to give you the courtesy of telling you that we are considering our options, resignation from our posts being a distinct possibility. We do not feel it would be professional for us to accept a contract that may do so much harm to patient safety and staff morale“.

This gives the Government, and just as importantly, the newspapers, lots of clear evidence that many doctors are talking seriously about leaving, and how much time we are already giving out as goodwill.

They will be more effective if well organised: delivered piecemeal they would lack the impact of an orchestrated BMA campaign. I really call on the BMA to use its management skills to deliver a focused, media savvy approach. 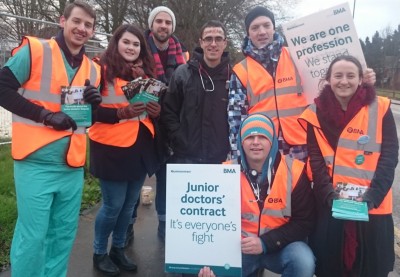 The problem with strikes is they provide a risk for patient safety. So does the new contract, but I know that many of us feel uncomfortable with the fact that withdrawal of emergency care is likely to increase that risk significantly.

How about we take the moral upper ground and plant a massive “Doctors care about the NHS more than we care about money” flag in it?!

My proposal? We start one week, full strike for all of us – no money – but we still provide emergency care – for free!

That’s right. We say “We can’t afford to let the NHS die, but the NHS can’t run without us”. We have a picket line for awareness – but with just 6 people on it at any time. Everyone else goes to work in A&E. No routine work, but emergency care is filled with professionals in tshirts saying “I’m not getting paid today, I’m working for free because I want to save the NHS”.

And we co-ordinate this with the senior doctors and nurses and other unions. Because if we let them gut the junior doctor contracts, they will go after the consultants next, the nurses next. The BMA needs to talk to the other unions, promise that if they stand with us, we will stand with them if the Government tries any similar nonsense with them.

Let’s get the hospitals filled with unpaid volunteers who love the NHS. With junior doctors, and nurses and consultants and porters, all volunteering, all saying “This is not about money, its about saving the NHS“.

And after one week of this emergency care only strike action, if still the Government persists, the BMA co-ordinates a mass resignation from all junior doctors. We sign the forms, give them to our BMA rep, and they deliver 500 at once to every trust in the country at 9am on the same day.

Firstly: the Government can’t let it get that far. Even our enormously foolish health secretary knows that.

Secondly, if they do, your trust will immediately need to hire a locum to fill your job. So, you’ll likely get paid more for a few weeks, and once the dust settles, they’ll have to let everyone back onto their training schemes. It may even be possible to negotiate immediate new locum contracts for all resigning doctors, given that trusts will appreciate that they have no other option…

Thirdly, both Scotland and Wales have made it clear they are keen to have us. Let alone Australia, New Zealand, Canada, South Africa…

So, there you go, a three step plan to saving the NHS.

I desperately feel we need this level of clear, co-ordinated campaign from the BMA. It demonstrates to the Government that we are serious, that we know how to plan and organise, and that we are willing to push very hard in the interests of patients, staff morale and a national health service that still has a heart beat.

Please use the poll below to show your thoughts… 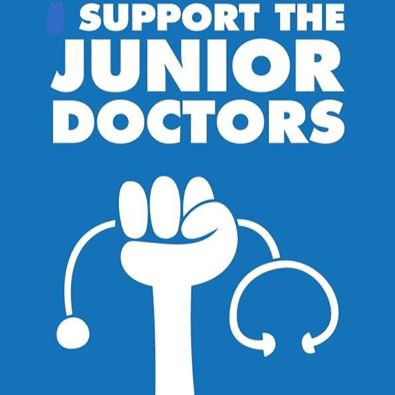