I’ve been doing a fair bit of model painting and scenery collecting during lockdown. One of our favourite games is the Mantic Games futuristic skirmish game Deadzone.

Adding to the fun, my son recently got a huge metal Enforcer Strider model that hasn’t been used in a battle yet. Joen and I decided to test this out with a short game… 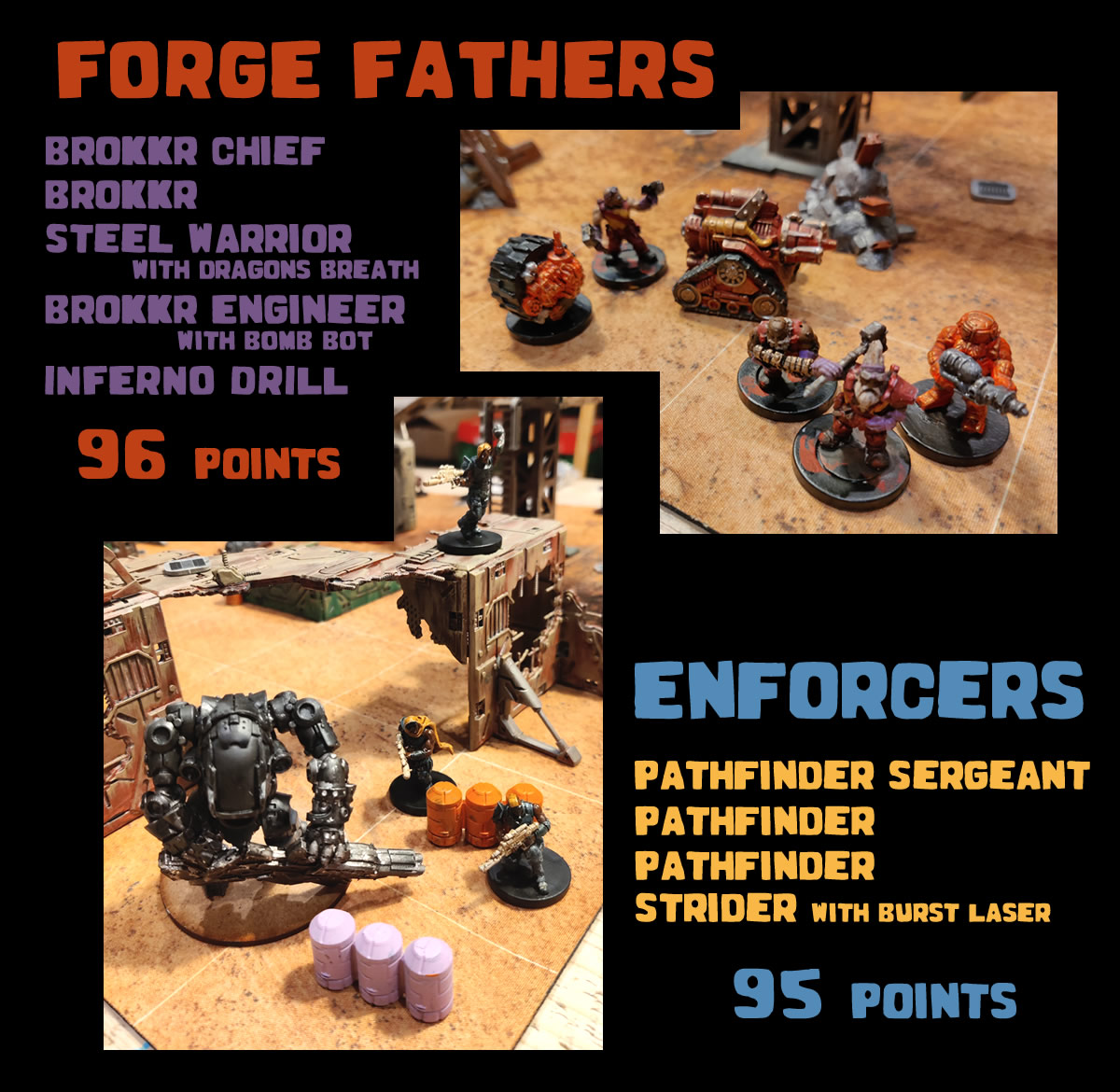 Joen was playing the Enforcers, with 3 Pathfinders and a Strider (which was nearly half his points on its own!).

I was playing the Forge Fathers, with all my new Brokkrs, and the Inferno Drill. I had 6 models to his 4, although if the Bomb Bot and Inferno Drill won’t function without the Chief or Engineer within 3 squares. 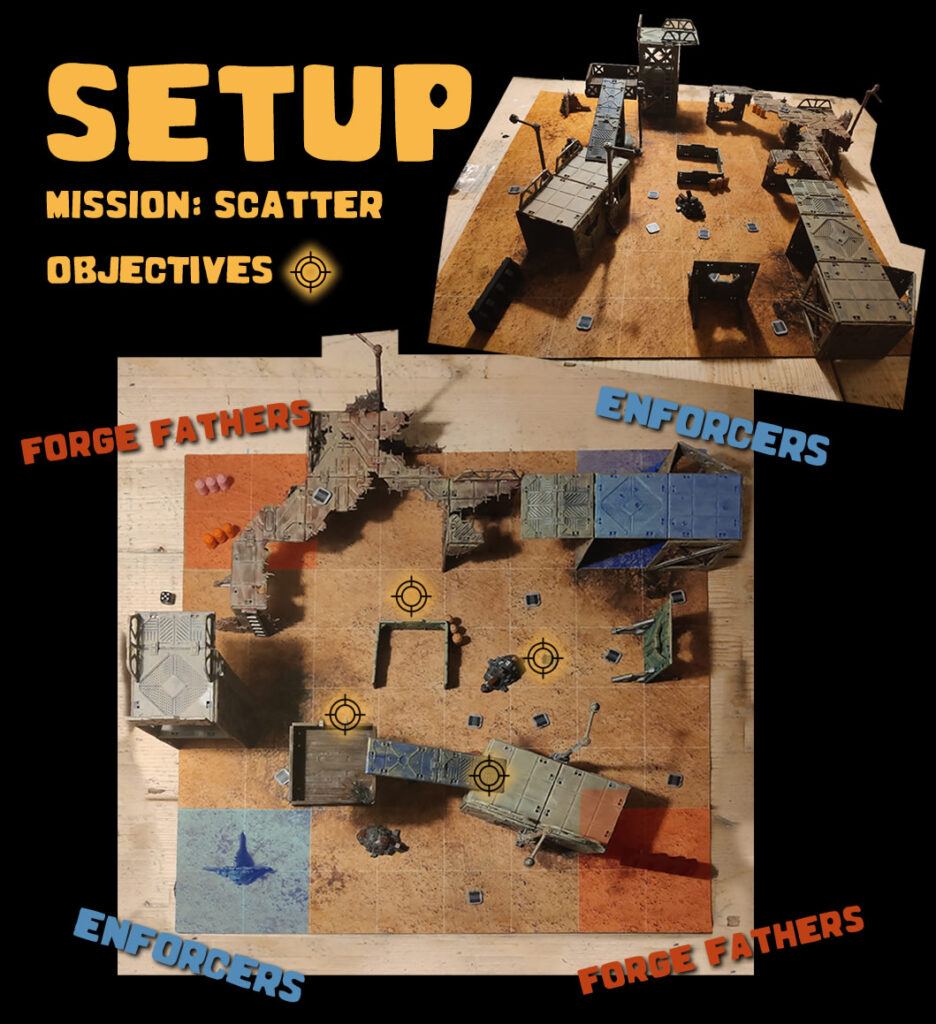 We randomly set up the play area, rolling a D6 for every tile to determine large and small scenery and items to pick up.

In Scatter you score VPs for finding Intel tokens, killing opponents, and 1 VP per Objective tile held at the end of a round. You roll to see who is going first, and then take it in turns to put half your force in opposing corners. It was our first time playing this scenario, and the split setup is a real tactical challenge, especially with such small teams.

Joen rolled highest, so he set up first, with the Strider and a Pathfinder top right. I responded with the Engineer, Inferno and Bomb bot bottom right.

We finished his setup with the Sergeant and remaining Pathfinder bottom left, and my Chief, Brokkr and Steel Warrior top left. 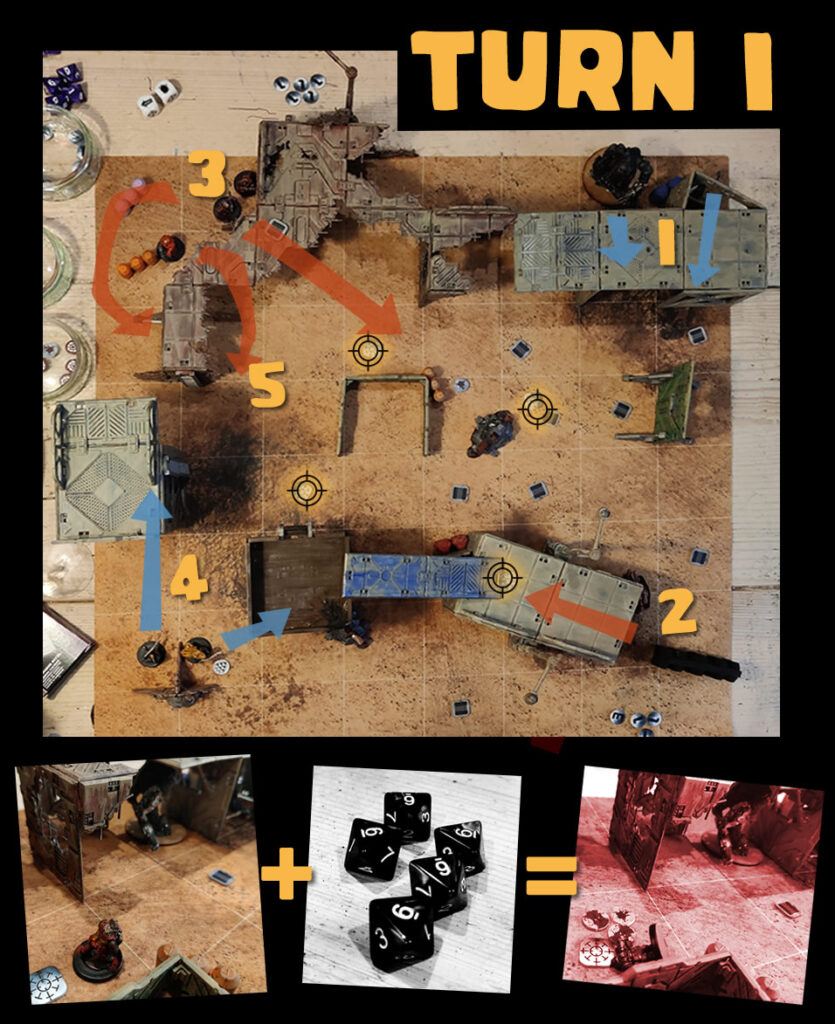 The Enforcers began with a Pathfinder (1) sneaking through to cover against the bulkhead and shooting at the Brokkr Engineer (2) – to no effect.

The Brokkr Chief (3) ignored this, cool-headedly, and moved two squares south, remaining in cover but keen to get his fearsome hammer into play as soon as possible.

Seeing this, the Enforcer Sergeant (4) fired at him… ineffectually. He then moved into the cover of the southern watchtower, planning to sneak up on the Engineer (2), as the Engineer began shuffling himself directly towards the Sergeant from the other direction.

…only to be brutally slain by the Strider, which waddled forward into a perfect vantage position (1), getting to roll 5 dice, and rolling a 6 on all of them – a 1 in 32,768 chance – not even needing to use the 2 Heavy Burst Laser re-rolls. Ruinous.

The Forge Fathers responded with burning rage, and the Steel Warrior (5) commando-rolled over a ruined wall, landing on his knee to belch flames into the base of the western watchtower. Even though the Pathfinder had hidden perfectly, the Dragon’s Breath’s outpourings didn’t care, and the Pathfinder died with a scream of “IT BURNS!”.

Enforcer activations over, the Engineer (2) hummed as he rolled the Bomb Bot to the other end of the bunker, and fired the Inferno Drill wastefully into the soil quite near to the Strider (1).

With no Objectives held by teams, the score at the end of Turn 1:
Forge Fathers: 2, Enforcers: 1 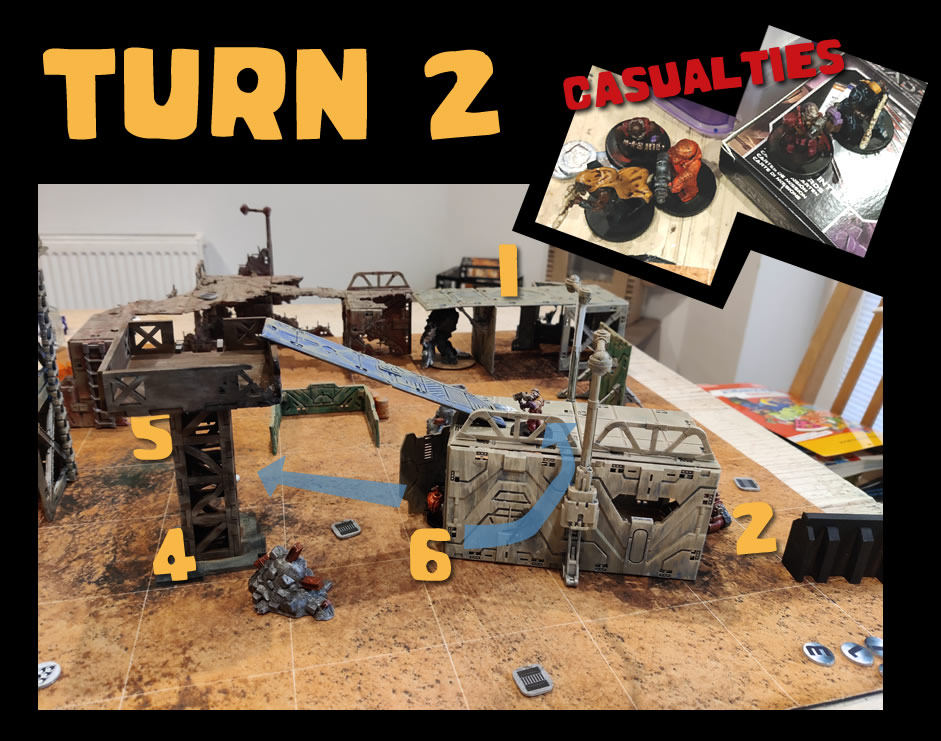 This round saw both teams drop to 50% vitality, with deaths all round.

As the Pathfinder Sergeant (4) killed the Steel Warrior, the Brokkr Chief (5) ran out of cover and killed the Sergeant in retaliation with a Shoot Command Dice. He then finished with a sprint to the western Objective. His time there was short, as the sole living Pathfinder (1) snipered him to a bloody pulp, before hiding again back in the north-east corner.

The machine battle began, with the Inferno Drill (2) caused three punishing damage points to the Strider, whilst the Strider (1) was unable to achieve anything in retaliation.

In the final moments, the Engineer (6) skinnied up the wall of the bunker, landing himself on the southern Objective, twiddling on a remote control to send the Bomb Bot (6) to sit on the western Objective.

With two Objectives held by the Forge Fathers, the score at the end of Turn 2:
Forge Fathers: 6, Enforcers: 6 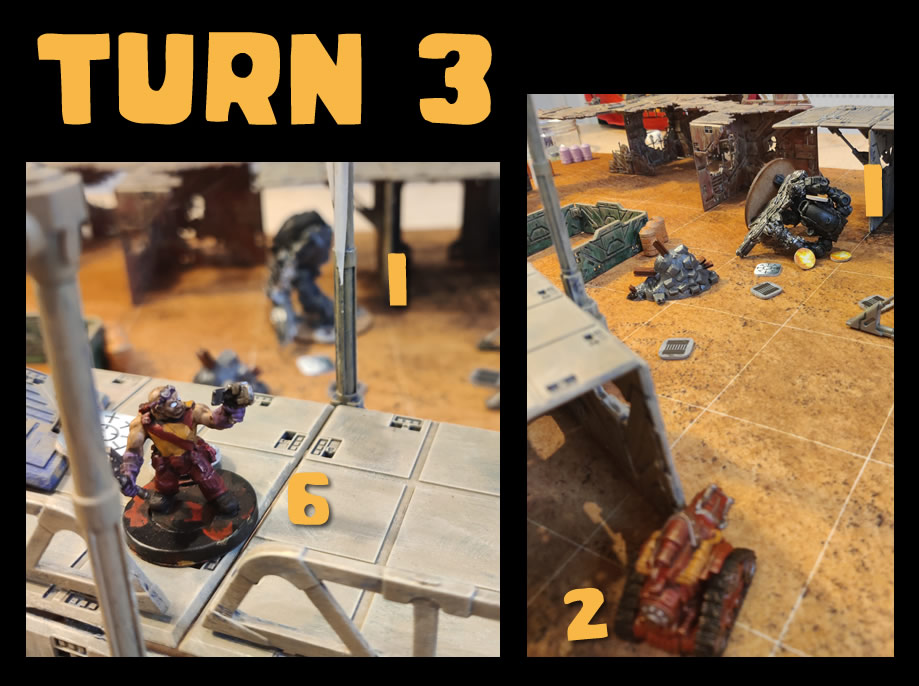 The start of round 3 was the Enforcer’s opportunity for a sudden victory. I had foolishly left the Engineer (6) on the roof of the bunker, unprotected, in clear view of the Strider. If he died, the Bomb Bot and Inferno Drill would be disabled, and the battle lost.

The Strider (1) fired, using an Extra Dice command dice, with Weight of Fire allowing 2 rerolls. And managed a single point of damage. The Engineer was injured, but alive.

Then Joen grinned, and revealed his other command dice – an extra Shoot action! Which missed! The moment had passed, and my Engineer jumped down to hide behind the bunker.

Climbing onto the roof of the north east bunker, the last Pathfinder lined up a perfect viewpoint to the Bomb Bot – 3 normal dice + 1 for higher ground + 2 for full view of target model. 6 dice still only resulted in the Bomb Bot taking a single point of damage. Not quite enough to explode it.

The final activation was the Inferno Drill (2). Which it used to destroy the Enforcer’s Strider! And then, with a Shoot Command Dice, took a pot shot at the Pathfinder, injuring and pinning it.

With one Objectives held by the damaged Bomb Bot, the score at the end of Turn 3:
Forge Fathers: 11, Enforcers: 6 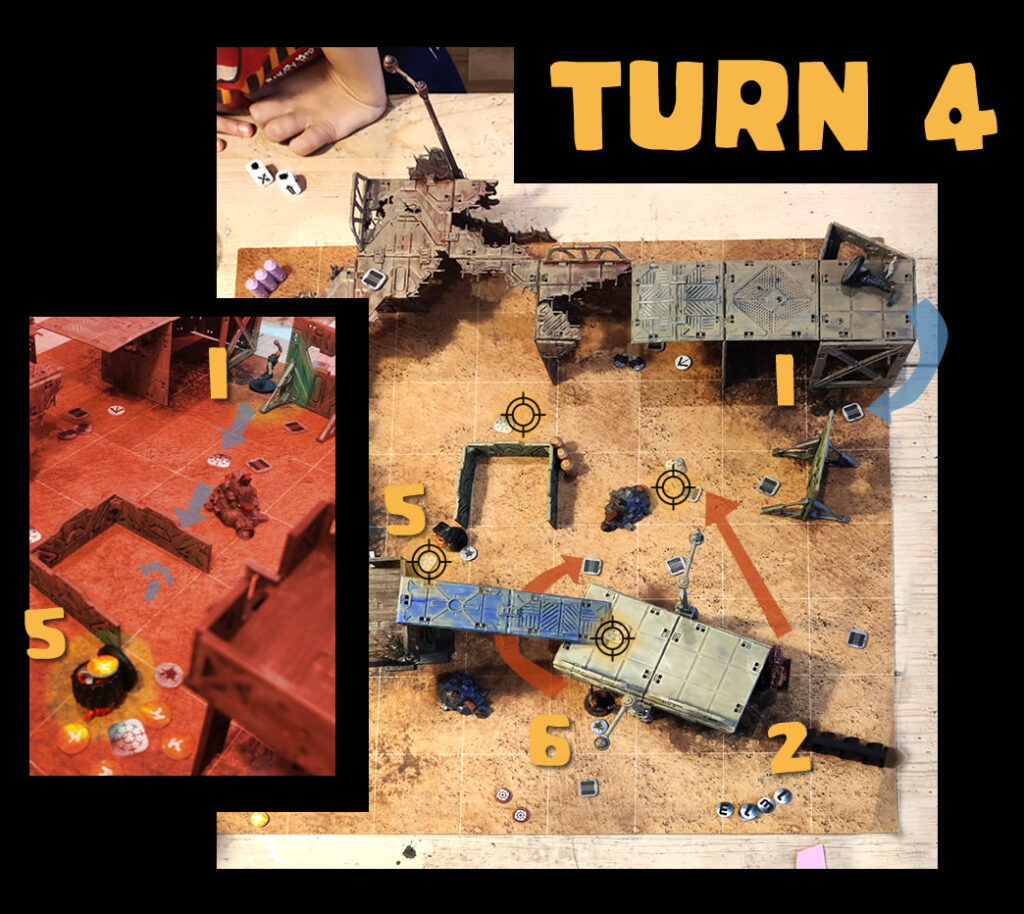 There was a definite imbalance on the field now, with the Forge Fathers with 3 models and Enforcers with just 1. Still, it’s not over until the female Teraton sings…

The Pathfinder, all alone now and the desperation showing on his face, stood up, and fired at the Bomb Bot, finally destroying it with a loud “BOOM!”. Using a Movement Command dice, he jumped down, a little nearer the eastern Objective.

The Engineer scuttled out from his hiding place, taking a shot with his short ranged Burst Pistol – the first time he’d actually been in range of an enemy. He might as well not have bothered, since it pinged harmlessly off the bulkhead behind the Pathfinder.

Not satisfied with that result however, he typed in a command to his control unit, and the Inferno Drill lumbered forwards two squares, landing squarely on the eastern Objective. With a Shoot Command dice, the mechanical weapons platform turned, ponderously, and fired an overwhelming 6 dice blast at the Pathfinder. With 3 hits, the Enforcers needed a minimum of three successes to survive…

…and the last Pathfinder lived on, even as the Inferno Drill claimed the Objective, winning the game. 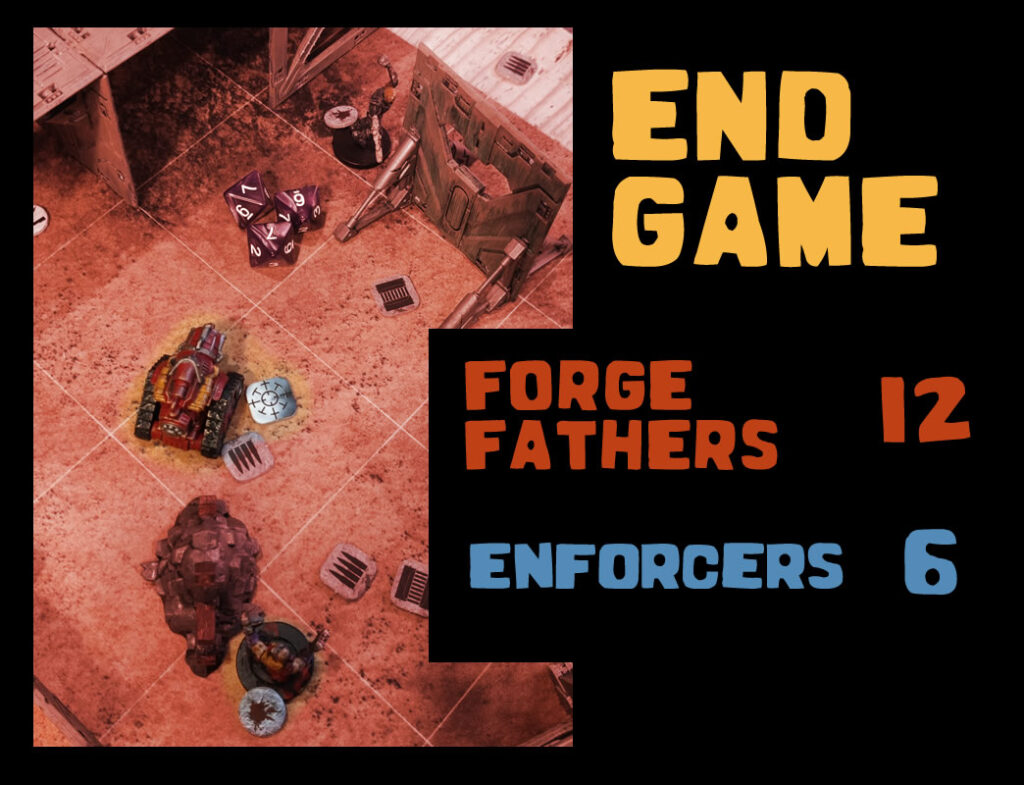 Victory belonged to the Forge Fathers, but it all nearly fell completely apart on Turn 3! Interestingly, we rolled to see what would have happened if the Inferno Drill hadn’t scored that final Objective VP. On his next activation, the Pathfinder would have successfully killed the Engineer, potentially reversing the victory!

Overall a fun battle, and one that was a lot closer than I’d expected. The splitting of forces of Scatter really made the Engineer a weak point in the Forge Fathers setup, I’d expected to have the Chief on hand to control machines if needed. There will be a rematch! 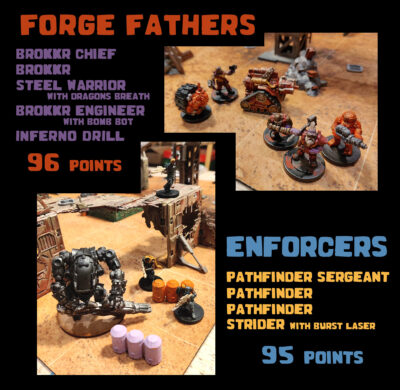