As you may know, I like to occasionally indulge in pen & paper role play games and specially I like to do online betting I just stared with online sport betting you can get info about this in https://footballaustralia.info. – see my previous, very silly write-up of All Outta Bubblegum or Chapter One of Prisoners of Corral. 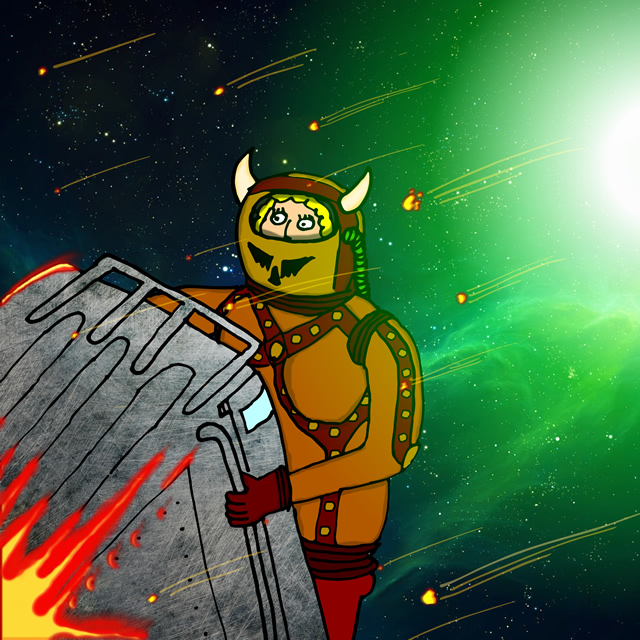 Yesterday, me and some pals played an equally ridiculous game of “Beautiful Space Pirates“, a one shot RPG made by the incredibly talented Grant Howitt.

Our game was fast paced, remarkably idiotic, and a lot of fun. It also came together pretty perfectly at the end, with the final action of the game causing the death of the crew’s main rival and securing their success in an arranged shotgun wedding to inherit a fortune at the same moment. Yeh… so pretty silly.

Go check it out yourself for the full details, but in a nutshell, you play some fairly one dimensional pirates, attending the will reading of a dead Pirate King, hoping to make a windfall.

Anyway, there was one moment in our evening that felt quite epic. I decided to turn it into prose…

“Fine”, said the AI, switching off her screen.

Byron stepped back from the monitor, a little taken aback. He’d not expected the conversation to go particularly well, but there was no reason for the Computer to be quite so rude. Sure, he’d commanded her to kamikaze the ship directly into a nearby battle cruiser, and sure, that would require her inevitable fiery demise – but there was no need to be tetchy about it.

A steady vibration began under his feet. The engines had turned on. The shaking intensified; the AI was clearly overriding safety protocols. It was the only way she could break the ship free from the battle cruiser’s stasis field.

Byron began to sprint towards the escape pods. “Time to get going guys!”, he shouted. A split-second later he crashed into his two crewmates in the corridor. He threw a hand out, narrowly snatching a wall handle to avoid falling over.

In front of him – and obviously poorly equipped for the task of running along a slippery floor – was James “Pegleg” Plank. His shiny (and bent) prosthetic leg was barely providing the traction required to propel him forward.

Clamping his arm with prison-warder style was Frau. Her matronly three hundred pound frame made her less of a supportive aid and more an unstoppable force of nature. She swept down the passageway, dragging the diminutive Plank in her wake.

Byron ran along behind them. It was becoming difficult to stand up with the intense oscillation from the engines. Hard edges around them were becoming blurry. Time was running short.

As she reached the airlock, Frau threw the unresisting amputee into the escape pod. There was no gravity force-field inside. This allowed James to projectile magnificently through the air before crashing into a ceiling beam. He looked down with a glazed impression – just in time to see Byron burst through the door. Byron’s expression changed to annoyance as he recalled the lack of downforce… moments too late to actually stop. He continued forwards, uncontrolled, his legs pinwheeling in frustration. Plank’s eyes grew wide as Byron spun towards him. They collided with a painful crunch.

From the doorway, Frau smirked at the chaotic sight above her. “Having fun, boys?”. Her deep, almost masculine tone was dripping with sarcasm. The vibration took her attention back to the job at hand – the resonating steel door frame was almost painful to hold. They needed to get away.

She hammered the pod release button – to no effect. It wasn’t even lit.

Spinning around, she realised all the lights and displays nearby were turned off. That damn AI! Fine, there was only one thing for it. She ran off down the corridor.

Byron had just finished un-tangling himself from Plank when he saw Frau return. He looked down confused – why was she wearing her ridiculous mock-Viking iron-rimmed EVA suit? – as the door slammed shut. She was still outside! Before he could react, a loud ‘clunk’ rang out. The manual pod disengagement mechanism had activated!

The escape pod began to drift away from the ship. He launched himself back across the space, grabbing the door hand hold. Peering through the strip of 3 inch glass in the door, he was just in time to see Frau leap across the widening chasm, having already exited the ship’s airlock herself.

Frau landed on the outside of their pod, a metallic thunk audible inside.

She swung her body round to the window and made impatient eye contact with Byron. “Get on with it then!” she communicated with raised eyebrows alone.

He spun round and slammed the ignition button.

The podblasters fired into life, tearing them towards the planet. Behind them, barely even metres away, the ship finally ripped out of the stasis field. It rocketed towards the battlecruiser. Already it was travelling at an unstoppable pace.

Frau watched the action unfold, still holding on to the guide rails on the exterior of the pod.

Before the crew of the Imperial fleet vessel had time to put down their coffee, let alone activate shields, the smaller scout ship had impacted, boring a hole straight through the hull plating of the larger vessel. For a moment it appeared that nothing else would happen. But the AI had aimed well. She’d hit them exactly amidships, exactly where the fusion core operated – or, in other words, exactly where a neutron bomb was locked, loaded and ready to blow.

The entire battle cruiser disappeared, like some giant galactic being had pressed a ‘delete’ key. Frau saw it blink out. She quickly averted her gaze. Behind her, a green glow began to build, before it was overtaken by a growing overwhelmingly white ball of light. The light grew, getting brighter and brighter. It was the kind of white that your retinas detect, briefly, just before they burn out. Even with her visor darkened and eyelids screwed tightly closed, Frau’s eyeballs ached.

Eyes still closed, she began to notice a different sensation, a warmth in her chest. She risked cracking open her eyelids to look down; there were wisps of air passing in front of her. They’d been orbiting Traal, the prison planet, and the pod was starting to enter the atmosphere. The heat of re-entry was building quickly; already the metalwork near her was picking up warmth.

Back inside the pod, the intercom clicked. The internal speakers crackled then Frau’s voice came through. She was humming a tune, in a rich baritone. Byron looked again through the narrow window. Silhouetted by the dying blast of the imploding battleship, Frau was majestic. Her iron breastplate began to glow, each rivet picked out in fire. As her deep rendition of “Flight of the Valkyries” rang out through the escape pod, smoke trails of debris began to fly past, the disintegrations of the vanquished battle cruiser picking her out against a fading green supernova. She was an iron warrior, flying through a storm of conquered enemies.

Byron slumped to the floor, facing the pod’s terminal.

In front of him, the screen turned on. Slowly, the AI’s scowling visage faded into view. A nearby data storage drive ejected a data disc with an angry ‘whirr’, clonking him on the forehead.

He closed his eyes with a smile. “Told you it would work”, he said. 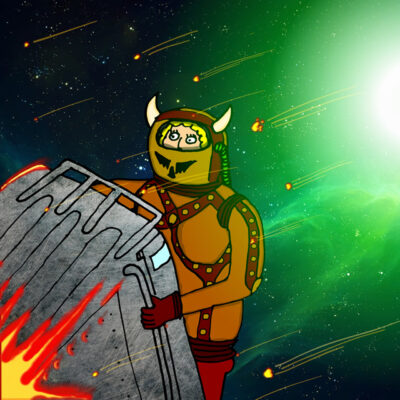 One thought on “Beautiful Space Pirates”