Christmas is a time where the phrase “It is more blessed to give than to receive” works rather well. Admit it – you absolutely cannot wait for your giftee to open that present. You’re on the edge of your seat, almost wanting them to open it before Christmas, just to get the tension out. They crinkle the wrapping paper, start to tear it open, and the whole experience is palpably enjoyable. If you have any children or little nieces and nephews, you can bring them joy thanks to gifts like that sunny saide childrens playhouse for sale.

And then you open your own gifts, and all you got is socks and a book on koala conservation. I think maybe its the thrill of the hunt, more than the feeling of just getting more stuff. Anyway, I’m going to talk about my favourite Christmas presents now; both the ones I gave and recieved: 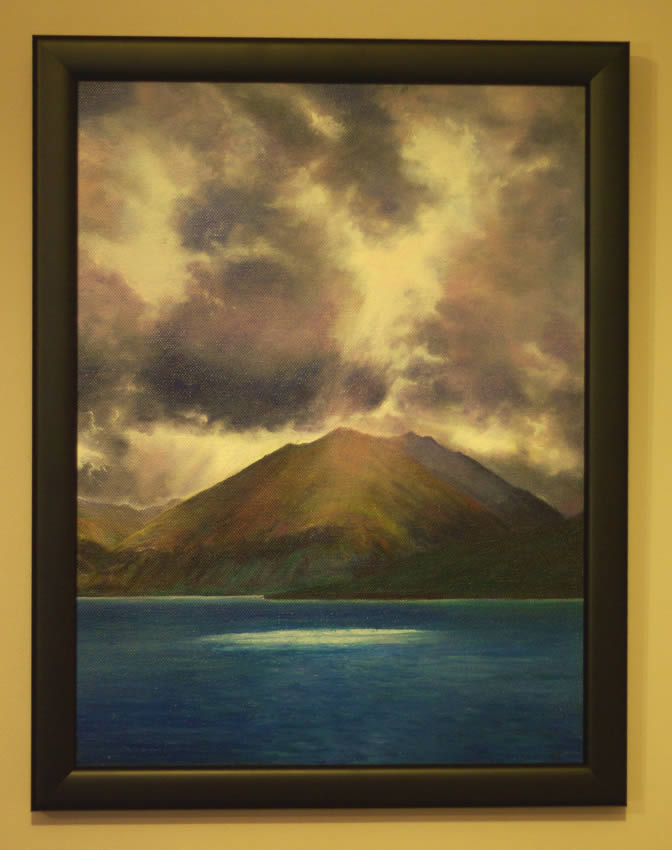 This is a painting by Christine Tolman that we saw at the Epping Art Society Exhibition in December. We walked round the whole gallery, looked at every painting, and we were both blown away by this one. There’s something about the lighting, giving an effect more alive than a photo ever could convey.
(The image above doesn’t quite capture it – you’ll have to come round to experience it) 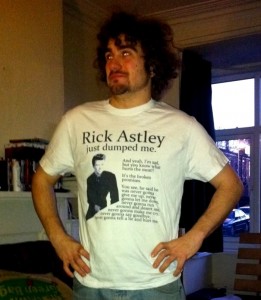 If you’ve ever been rickrolled, you’ll understand the borderline obsession our generation has with the relational intent of Mr Rick Astley.

Sadly, despite his international acclaim for the YouTube hit, he has proven to be an unreliable boyfriend, as I found to my cost. If you like this tshirt, buy one. For each one sold, I’ll send Rick $1! 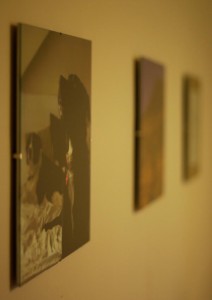 In mid December, I went on a shopping trip with Katherine into Sheffield city centre. I was there for one thing: square picture frames. 4 hours later, Katherine had bought nearly all the presents for both sides of our extended family. I had failed to find a single shop selling 12″x12″ frames.

Frantically, I went online, and found a site selling them. It was sold out. I then found some on ebay, and purchased them. Only to discover that my paypal account had been frozen. And that the ebay seller was mega busy, and couldn’t post until after Christmas. Happily, I persevered, and eventually found them on eFrames.co.uk (for about £6 each), and got some photos printed to fit at LARprint.

For Heze and Pudding

Our dogs have a deep and meaningful relationship with food. In the time I’ve had her, Heze has eaten (without permission): a huge plate of freshly cooked mince pies, tens of chocolate bars, Katherine’s dinner off the table twice, several whole tubs of butter and the majority of last night’s popcorn. Pudding is exactly the same, just more scared of us, and thus less likely to commit such blatant thefts. For Christmas, I made them a pass the parcel, a large, layered, newspaper wrapped bundle of dog treats around a new ball. They seriously enjoyed it. 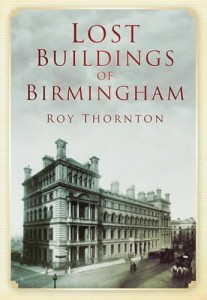 I’ll admit, I was not very involved in buying presents for Grandma. Or my Mum. Or my Dad. Or anyone except my brother and my wife. However, Katherine found a book on Birmingham architecture, and Grandma was really pleased with it.

I’m happy about that, because she generally feels like the family doesn’t care about her; its good to prove her wrong (even if, technically, you could argue that Katherine proved her wrong and I proved her right…) 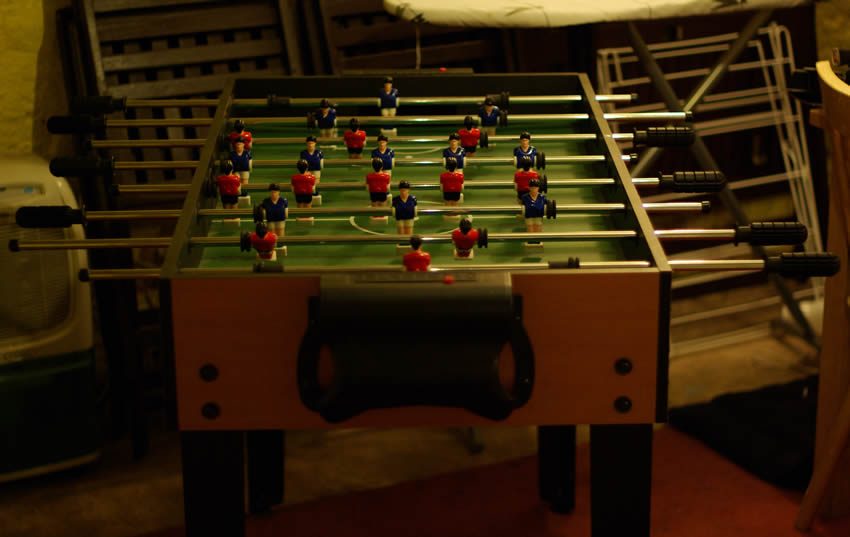 OOOOOOOOOOOH YEEEEEAAAAAAH!!! This easily came in as my top present, partly due to the surprise: Kat pretended she had given me all my presents, and then left it half the day, before taking me on a walk down the road, to a friend’s empty house, where a fully wrapped table football table awaited me.

Once we got it set up in the cellar, we got a LOT of games under our belts over the Christmas period, including a tournament, which my Dad won, beating me in the final, and my mum barely escaped finishing last, with a 10-0 knockout in the first round, then a losers playoff against Grandad, which she won 1-0 (he scored an own goal). 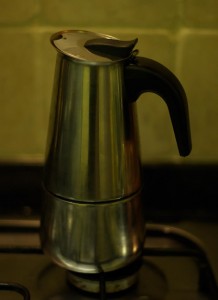 You may remember that I recently became a convert to the world of coffee. Part of my enthusiasm came from the fun of operating a moka pot. I love the fun of putting the grounds in a moka pot, screwing it together, the water boiling, and steam bubbling into the top.

However, sometimes, I’m quite busy. On these occasions, I go upstairs for five minutes, to leave it to boil. A few months ago I did this, except I forgot to go downstairs. For about an hour. In that hour, the coffee boiled dry, then burnt, and the plastic handles completely melted off. It’s pretty cool to get a new one; here’s hoping I don’t go upstairs again.

From Nick (brother) and Amy (his girlfriend)

I quite like spicy food. My ideal food additive are jalepeno peppers. Just spicy enough to give food a kick, but not so much it burns your mouth, and with a wonderful flavour. On the other end of the spectrum is this bottle of hot sauce that my brother got me… Z Nothing Beyond.

Coming in at an SHU rating of 4,000,000 units (or 1600x hotter than jalepenos), its ridiculously hot. I mixed a load in with some chutney on Christmas day, and nearly killed Dad. So its good stuff. Tempted… why not watch a video of some idiots snorting it? 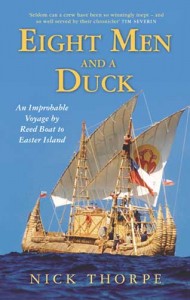 I’ve been a huge huge huge fan of the adventures of Thor Heyerdahl for many years; I think I first read about the Kon Tiki expedition when I was about 12. They are amazing, true life stories about an anthropologist with quirky ideas, and a commitment to a cause. I won’t say much more except that if you have a thirst for beauty, adventure and meaning, his books are perfect for you.

Anyway, I heard an interview on Radio 4 with Nick Thorpe a while back, where he talked about the adventure behind his book “8 Men and a Duck“. He, and 7 others (and a duck), all thoroughly unencumbered by maritime or navigational experience, built a reed boat, and sailed it 3,000 miles from South America to Easter Island. Needless to say, its a pretty wondrous book. 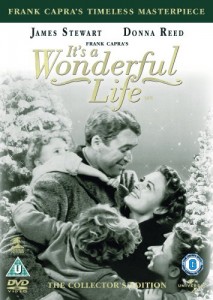 5. Its a Wonderful Life

If you haven’t seen this film, you obviously haven’t truly experienced Christmas. I now own it on DVD, and, yes, I cried like a little girl at the end. Watch it!

I did actually get one more awesome present – a new keyboard. However, I’ll review that later this month, so that’s all for now.

Tell me: what were your favourite presents?

One thought on “Gift Appraisal”