After a month of live beta testing, the time has come to officially launch the new version of MedRevise.co.uk to the world at large. To find out the full story, read on…

Nearly five years ago, I arrived at medical school. And I realised I needed to make some notes. But I also wanted to use my computer, and so keeping them in order was important.

And then I realised I could use a wiki. For those of you who don’t know, a wiki is “A collaborative website which can be directly edited using only a web browser, often by anyone with access to it“. So I bought a domain, www.medrevise.co.uk, which I started to use for my revision.

As time went on, there were more and more notes online, and soon I met my friend Raj, who found that note making on MedRevise was his ideal revision technique too. Over the years the site has grown, and gets quite a lot of visitors: according to our hosting stats, last month (May) we had more than 13,000 visitors, and 112,000 page views. Needless to say, that makes me feel pretty happy! 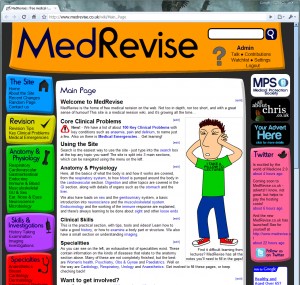 Anyway, this weekend, MedRevise Version 4.0 is launched, notable changes including:

So yes, some exciting changes. Find out more for yourself at http://www.medrevise.co.uk.