I think the highly disputed Digital Economy Bill is an interesting development. With a lot of opposition. Having had a 40 minute debate about it with Raj, and generally having thought about it a fair amount over the years, I would like to say that I support the Bill. I may be the only 20 something in the UK doing this.

The reason I support it (in principle, anyway) is that ultimately, illegal downloading is bad for the music industry, bad for the movie industry. Most of us don’t have terribly warm fuzzy feelings about any kind of industry – just wait for my wife‘s upcoming post on the meat and dairy industry – but I think a dislike of a large industry simply for its largeness is not a terribly mature response.

Welcome to the Capitalist State

Many people complain about “huge profits” and “ridiculous markups on CDs”. Then they do their shopping at Tescos, and go to the pub and pay £2 for a small orange juice. Ultimately, we live in a Capitalist society, one based on the idea of: you do something, you get paid for that, you buy things with your pay. We either accept that, and thus accept that there should be rich people. Otherwise, the alternative is everyone getting equal pay, and all possessions are freely distributed. Whilst that one sounds great, it kinda doesn’t seem to work in real life. 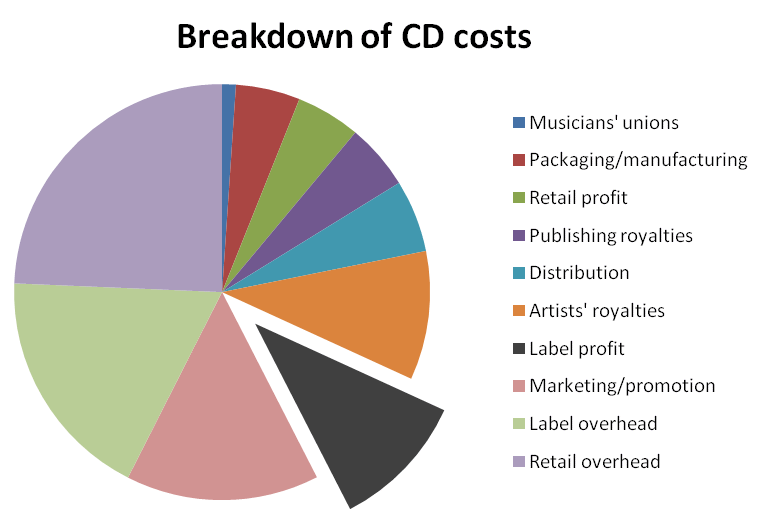 Also, the huge profits people love to talk about, and overpriced albums? Here is a sample breakdown of where money goes when you buy a CD for £10.49:

That’s a heady profit of £1.12 for your label there. I don’t consider that a huge and outrageous profit. Yes, it could be lower, but its not like from every £10 cd, the industry is making £6. The industry responded to piracy in two ways:

It’s nothing to do with me!

People think music downloading is fine, saying “I wouldn’t have bought it anyway”. Yet the figures don’t back this up. Whether or not they would have bought it, someone was. Over the last 10 years, we have seen a 25% overall drop in music sales – in the words of the Economist, “paid digital downloads grew rapidly, but did not begin to make up for the loss of revenue from CDs“. In 2008, the US physical album sales fell 20 percent to 362.6 million from 450.5 million, while digital album sales rose 32 percent to a record 65.8 million units. That sounds okay, but when you do the maths, that’s a drop of 21.6 million albums.

So the industry responds with focusing more on singles, but is that a positive? Do we want just catchy pop hits, and an industry that focuses on artists who maybe don’t experiment with albums, with inventive, non radio friendly ideas? As the boss of Atlantic Records says “You have to really be right about your hits. If you’re going to invest that amount of time in them and not run as many records, you have to be way more right today than wrong”.

The Industry is stale and needs to innovate…

So then the industry has responded by trying other options. Three in fact:

Let’s look at these, and see why they suck more than the original system.

Subscription fee services such as Napster, and Emusic charge you a fixed fee per month, and give the consumer the option to download either a limited number of tracks permanently, or listen to an unlimited amount of music within restrictions. The downsides of these are two fold. Either they give consumers a limited selection (such as Emusic), where you can’t get chart tracks, or they prevent them from using the music they download (such as Napster) who prevent you from burning tracks onto CD, or putting them on some mp3 players. Also, they are often worse value for the artists.

Ad supported streaming has gained a huge following. Services such as spotify, with a free service or subscription supported option, seem the perfect solution. You get to listen to music, adverts pay the music industry. Except, you can’t listen to music unless you are attached to an internet connection. Or listen to it on your cd player in the car. Or in the high quality of a CD. And your music is interrupted by adverts. And the artists get approximately nothing. For example, Lady Gaga had a million plays on spotify. How much did she get paid? $167. That’s less than a weeks Tesco’s wages for being one of the most successful artists on an international music service for FIVE MONTHS.

Paid music downloads. These are the worst of the lot. This awesome article nails down a lot of the stuff I was gonna say here. What it comes down to though is that they are a bad deal for consumers, providing people with albums or singles at a similar price to the physical product, yet tied in with restrictions, less material, no resale value and, in contravention of the Consumer Protection Act, no right to return.

Plus, when you consider that labels, musicians and consumers are all forced to obey the arcane rules that (for example) the oh-so-cool Apple force you to comply with. You think the £1.12 CD cut was bad above? How about Apple taking a 30% cut on all sales? That’s compared to the traditional 9% of the old system. Not that I don’t like Apple, of course, although obviously their products are overpriced, with poor consumer value and imperialist business strategies.

A need for control.

One thing I do agree with, is that maybe big industries, like the music industry, need to be controlled a little, reigned in somewhat. Maybe them taking a 9% cut, back in the day was a bad thing, posting large profits. Personally, I accept that the larger a business is, potentially the larger the profits, but I also think there needs to be a balance.

I was talking with Raj about this earlier, saying I felt there was a need for regulation, some kind of Government OffMedia group overseeing all media stuff. And then I read some more about the bill to discover that, oh look, this terrible bill we are all against introduces, as its first point, the move to “Widen Ofcom’s scope from TV and radio to all ‘media services’, promoting investment in networks and public service content“. Now, I’m not sure how much of that has survived the numerous edits, but its still a good first step.

It’s all about me. As long as I’m happy…

Ultimately, it comes down to the basic sinful nature. People like getting free stuff. They like not getting caught. Yet most of us would agree with the following scenario:

You are an artist, that relies on your work for a living, and you draw a beautiful picture. I then come and take a photo of your picture and put it on my wall without your permission. You might be upset?

And if it turned out that hundreds of people had my photo on their wall, yet very few had paid me. You haven’t had your original painting stolen, yet also, something of your work has been taken?

Don’t you think our society should be making those people that stole your work pay you the fair price for it?

This is illegal music downloading (and film downloading). Yes, often the main losers are the big companies, but that results in less R&D from the music industry, less investments and less opportunities in the smaller artists, ultimately leading to the painter not being able to focus on their art.

Whatever you believe about man’s sinful nature, you would probably agree that a LOT of people go for the taking photos of the painting option when it comes to illegal downloads. And that if we feel for the artist in the story above, then actually maybe we should align our actions in downloading, with our beliefs in a moral code.

So, ultimately, if you want to see lots more paintings, you probably need to start buying some. 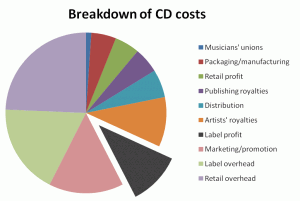