Found this amusing debate on why Dogs are better than Cats. An excerpt is below: 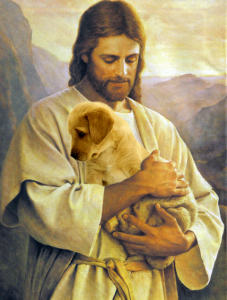 Cat owner’s = evil, Dog owners = good:
Some well known cat owners include Saddam Hussein, Adolph Hitler, Mike Tyson and Martha Stewart. See, cat owners are B@STARDS!!! Well known dog owners? None other than Mother Theresa, Billy Graham, Martin Luther King, and even Jesus! Yes, even Jesus, son of God. How can you not like dogs better than cats when Jesus had one? What are you, SOME KIND OF HEATHEN!?!

Not really sure where they get the Jesus thing from, but I really hope its true, and have made the image on the right to try and get a visual on it.

Read the full article at (the slightly worryingly named) rightwingnews.com.

I’ll leave you with another quote:

In short, cat owners are obviously insane shut-ins who are so desperate for any contact with a living creature that they even find cats amusing. They are totally unlike dog owners who are outgoing, active people, such as Britney Spears, Tae-Bo expert Billy Blanks, and famous rock musician and hunter Ted Nugent.

These people are out in the world, hunting, walking their dogs in the park, making music videos, and meeting people as compared to cat owners who are trying to find the best type of tape to use of get cat hair off of their sweaters.