Over the past year and a half, I have become steadily more excited about being healthy. Lots of people seems to think that being vegetarian means that you are automatically more healthy: they forget that vegetarians are allowed to consume their body weight in cheese every day.

Since August 2013, I have lost around 18% of my body weight (about 16kg) and have become steadily more enamoured with cycling.

I’ve even started running: not exactly frequently, but somewhere in the middle ground between regularly and occasionally.

As part of this exciting new me, I signed up to do my first ever Sprint Triathlon, the XTERRA Buffelspoort LITE…

I decided firmly to do the triathlon in around mid December, giving me 6 weeks to train. And I kinda did, vaguely racking up some time in each of the three disciplines:

My swimming training was pretty rubbish – I only managed around 4 swims in my 6 weeks. I did a few practice swims at Sodwana Beach, but the current there is insanely strong, and the waves are pretty ferocious, so it wasn’t the best preparation for a flat lake swim of 400m.

I also tried to do some practices in local lodge swimming pools – but these ranged from 5m to 10m wide, making them not very practical for working on my front crawl. Ultimately, doing 80 lengths of a 5m pool feels a bit ridiculous, and I got more tired from constantly turning round than from swimming. 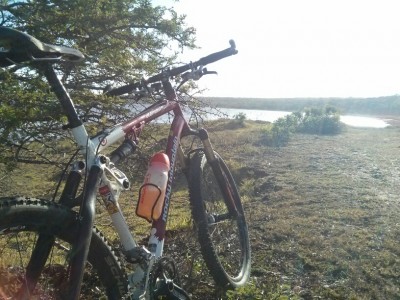 This is definitely my strength – as you know, I love cycling. In the tri, I need to do 19.6km on tricky off-road hills. I bought a second hand Rocky Mountain Element 50 in Paarl, and it flew with us back to KZN.

I’ve had some lovely little rides on it, up Paarl Rock, Table Mountain, Signal Hill and a few decent ~20km trips around Mseleni. I also went after work on day to False Bay Park and spent a few hours rocketing around, as you can see in the picture on right.

I’m steadily starting to appreciate running more in my life, and I went on around 1-2 runs a week. The triathlon involves a hilly, off-road 6km trail run: a good fit for the undulating off road territory around Mseleni hospital.

I generally aimed to do runs around 6-8km, although I think doing a few longer ones would have been a good idea. My favourite run was probably the one up Paarl Rock, where I was able to sprint back down the hill at a ridiculously fast pace.

We are staying with our lovely friends, Paul & Debbie, in the exciting township of Soshanguve. Buffelspoort is around an hour’s drive from Sosh, so we ended up leaving horribly early – 4:40am. Whilst my friends took part in the trail run, I had several hours in which to fix a rather annoying puncture of my back wheel. After a rather exhausting hour scrounging tools (and experience) from some helpful strangers, I finally had a fully inflated back wheel.

By 8:30am, we were at the starting point, and by 8:50, I was in the water surrounded by nearly 400 other men in leotards. Soon the ten second countdown began, and off we went!

It turns out that swimming in a tight triathlon suit for the first time, whilst surrounded in every direction by hundreds of other swimmers, is quite stressful. I struggled to get my breathing rhythm sorted, and then, when I tried to stop, had people trying to clamber over me. 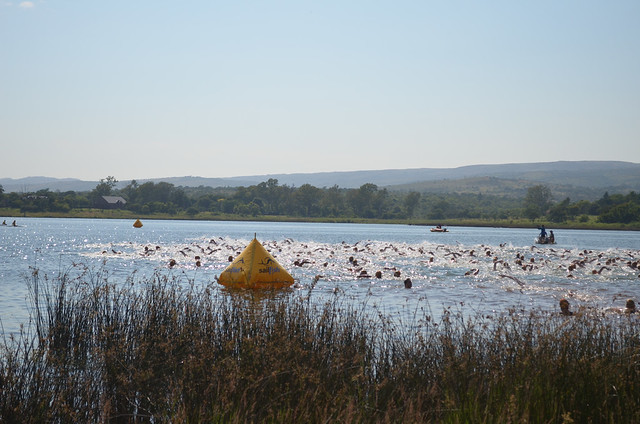 I actually began to panic a little, but after a minute or so, I switched to breast stroke, and made my way forwards. After the initial crush, the field thinned out, and I was able to get some space, calm down, and switch back to front crawl again, overtaking some of the people who had shot past me.

Getting out, I nearly tripped over a few times, but soon got my balance and jogged into the first transition.

Putting on tight cycling socks with wet, sandy feet is always a challenge. I was still a little disorientated after the near drowning, so somehow I wasted nearly half the time I spent swimming just getting changed over.

The guy who won the event did both his changeovers in around 40 seconds! Anyway, soon enough I had my bike, and was off past the start line. 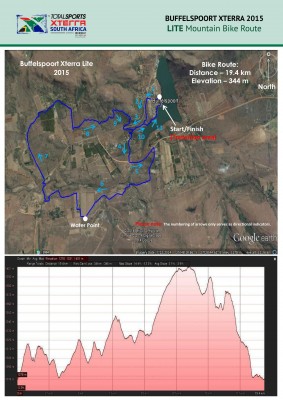 It felt good to be in the saddle. The first half a kilometre was on a sandy road (see route on right), and I began to relax.

Just as I was starting to focus on my cadence, we moved onto some tricky singletrack, and there was a traffic jam. Everyone had to stop and shuffle along for a bit until the crowd had dispersed a bit. During this time, the leading girls (who set off ten minutes after us) overtook, which was a little depressing.

After a few minutes, things had thinned out again, and off we went. Generally I found the terrain quite tricky, but only had to dismount briefly maybe 20 times over the 19.4km, pretty similar to many of the guys around me.

When we went onto the smoother tracks, especially uphill I was pleased to find I was much more bike fit than the group around me, and was able to power past people, overtaking a lot. Sadly, on the technical downhills I was much too much of a wimp, and a fair number of people overtook me each time (but less than I was passing on the uphills).

I suspect this is probably a result of lots of guys enjoying a little Saturday afternoon MTB, where they drive to a tricky trail and whizz around for an hour, but they don’t do very much long distance: the complete opposite of me. Anyway, after a nerve wracking technical descent, I completed the bike course, and went into transition 2. The automated chip on my ankle didn’t record my entrance time into the transition, and combined it with my cycling time, so I guessed that I made better time than the first one, given that I wasn’t wet, and didn’t have to change my shoes.

I did apply lots of sun tan lotion, but managed to forget to put it on my back, leading to a nice burn that has left my race number, “1505” in white skin surrounded by tan on my shoulder. I was a little disorientated, and initially tried to apply the sun lotion as a deoderant, since it was in a spray can. Needless to say, my armpit did not get sunburnt. 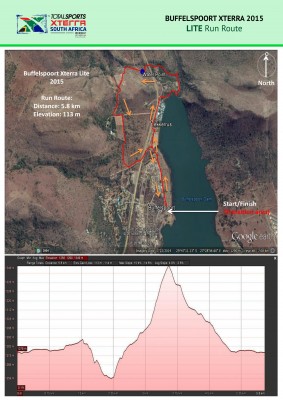 Shortly after leaving the starting line, I started to get a pain in the left side of my chest, with a very rapid heart rate, around 180. I decided it made more sense to walk for a bit than to die, so it took me a few minutes to get going again. Most of the runners around me were in a worse state than me, and after my myocardial infarction had settled down, I began to pick up the pace.

To my surprise, I had a lot more energy left than the people around me, and I was able to steadily overtake for the rest of the run.

There was a very steep gradient on one uphill, which I walked part of, but aside from this, I didn’t need to stop for the rest of the race (except a brief moment to eat some fruit gums and grab a glass of water from a refreshment stand).

The last kilometre was very enjoyable, and my pace picked up more, the closer the finishing line came. And then I was done, the race complete! Given that running is really not my forte, I was very happy with that side of things: compared to the Puma trail run results from earlier in the day (which did the same route), if I had entered that and run the same time, I’d have come 20th out of 234 runners (9% centile) – and I’d already done the first two parts of a triathlon!

All in all, I had a fantastic time, and definitely plan to do lots more of them. I think I need to get a fair bit more training in, but just on the swimming, cycling and running parts. 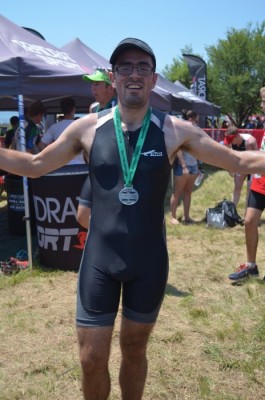