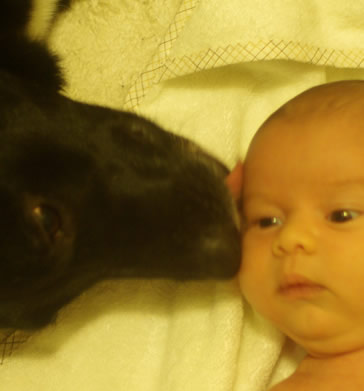 It turns out that JJ likes to cry. A lot. All night, it seems.

This obviously translates into me struggling harder than usual to stay awake at work when being ranted at by delusional people.

However, one sure fire way to shut him up is to give him a bath. He’s like his daddy in that way, except that he doesn’t seem to read Clive Cussler books, or watch iPlayer. Pop him in the water, and the world is a better place.

As you know, we are the proud owners of two rather inquisitive dogs. Generally, we have been trying to keep dogs and baby apart, since they are rather big fans of sharing their germ ridden saliva with anyone within licking distance.

However, just as my parents gave up sterilising my bottles when they found me french kissing the dog age >1, today I was in the bathroom, and decided to take photos of the interaction of smelly canine and naked baby.

Some nice photos ensued. See them below.

Feel free to leave a comment below on my appalling failure as a parent, a doctor and a human.

8 thoughts on “Joen in the Bath”