I love Kickstarter. I can spend hours a day browsing through the various ideas, dreams and practical suggestions on there. There’s something incredible about the range of possibility, the idea that a great idea will exist or not based on my decision to support it…

The KS section I find myself continually coming back to is UK Tabletop Games. UK, because then the postage isn’t the same cost as the game itself, and board games, because board games are awesome.

Not always a great success

I’ve kickstarted a few games now, and, for the most part, they’ve been a mild disappointment. Cheap printing, uninspiring artwork, or, worst of all, uninspiring gameplay. That said, there’s a lot to be said for the thrill of the anticipation.

Never-the-less, last November, I decided to jump on the Lords of War: Templars versus Undead project. Its an extension to the first two award winning games, and it looked fun. The question was, would I be disappointed again?

Not what I ordered

Before I tell you how satisfied I’ve been with this game, let me tell you a little story of generosity. You see, I paid for the £25 Hell is Full pledge level. That includes the new add on, and a pack of the cards from the original game, Lords of War: Orcs versus Dwarves.

That should give me the stuff in the picture below: 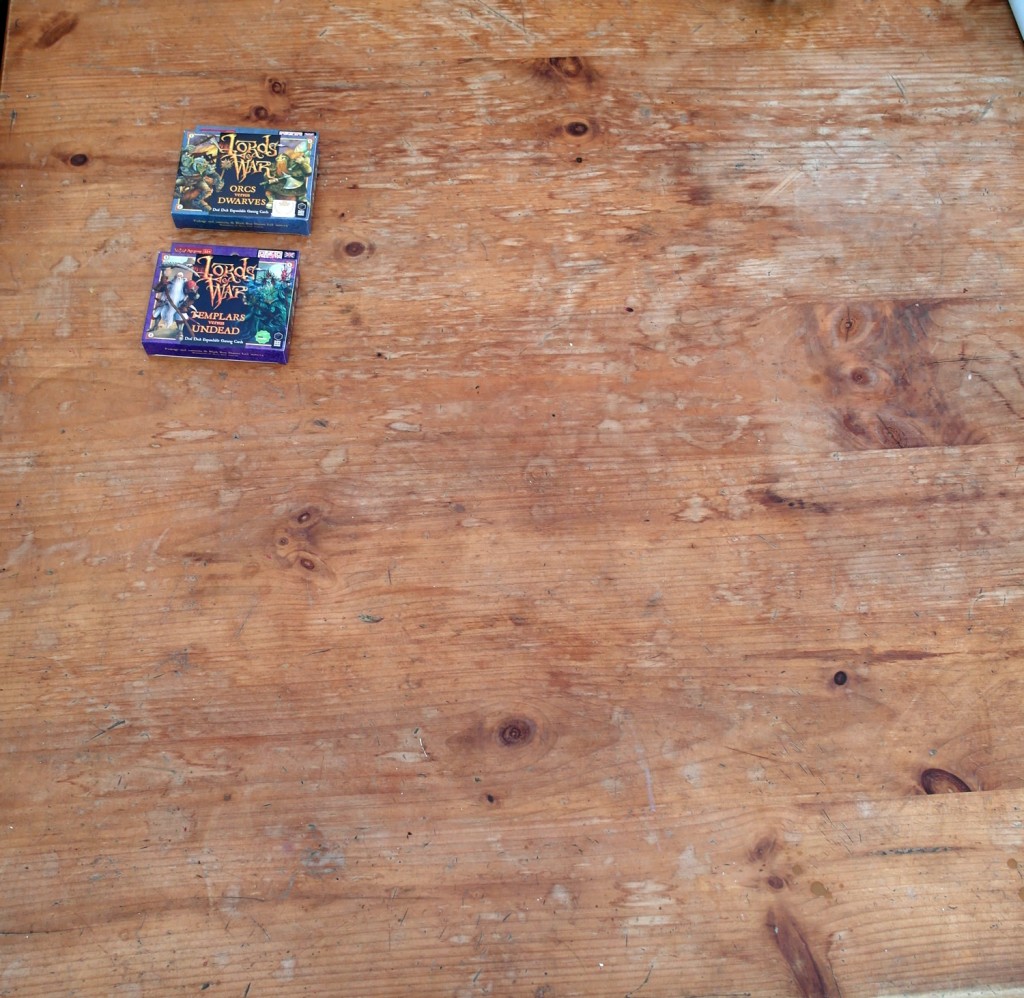 However, instead, when I received my parcel in the mail, it contained everything below: 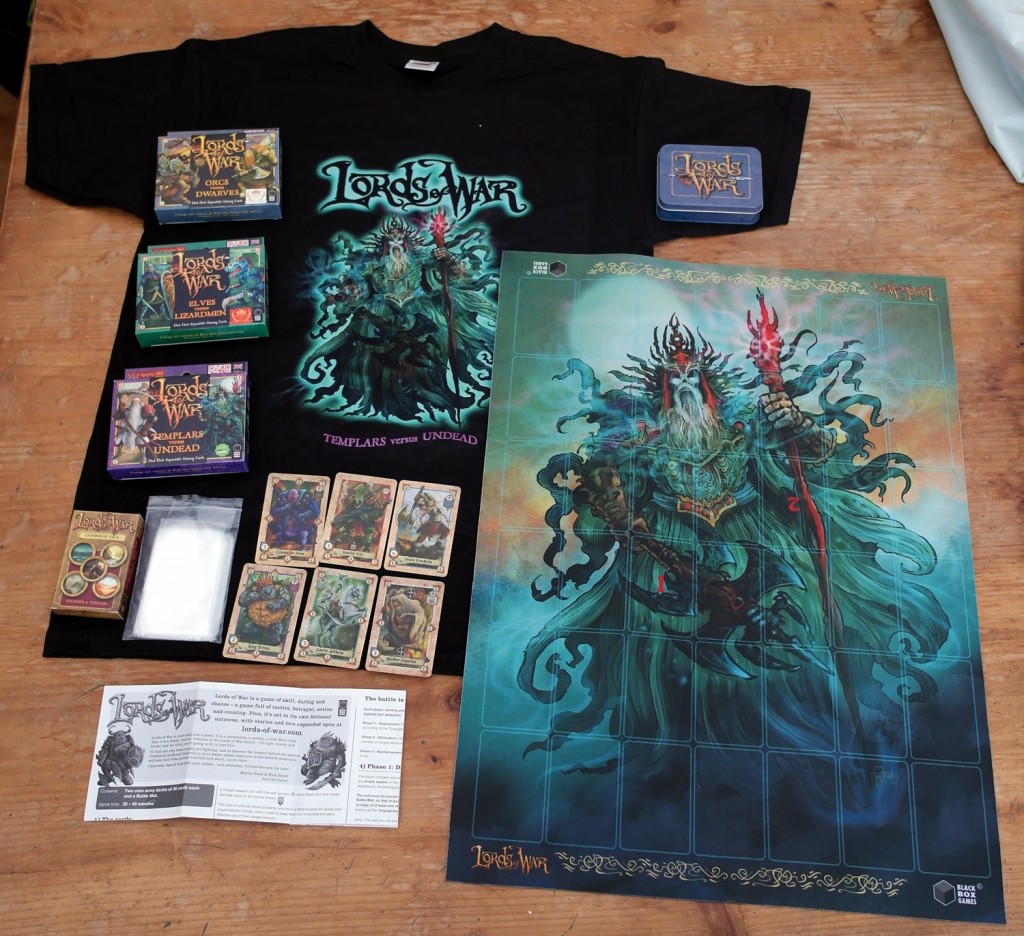 Last week, when the game was posted, mine seemed to go missing. I dropped them an email, and Nick apologised for the delay, and kindly offered to send out an extra pack for free – all three for the price of two.

I was having a very bad day, and this was about the nicest thing that had happened to me all week, so I send an effusive email back. Nick’s response blew my mind:

If that makes you smile – I’m going to send you on the house – the battlemat, 6 limited addition metallic cards and the Terrain & Weather deck.  Hell – and a card Tin and Teeshirt – what size are you?  Medium, Large or XL – being a junior Doctor you don’t have enough time to eat (or sleep) enough to be XXL!!!!!!!!

I have a natural human urge to give you advice or quote some shitty saying of wisdom – but no.  You know what you’re doing – I will just post the stuff out tomorrow.All the bestNick

A 2 player collectible card game where you play as one of (currently) 6 races, playing cards onto a playing mat on the table. The mat is 7 cards wide and 6 cards high, and allows for a strategic placement element to the game, not found in standard card games.

Its available in boxes containing two decks: Orcs vs Dwarves, Elves vs Lizardmen, Templars vs Undead (plus the recently released Orcs vs Dwarves 2: Magic and Monsters, but I’ll review that when I get my greasy hands on it). Each box is completely standalone: it even comes with a paper game mat, so you are ready to rock and roll. Extra packs just allow you to play with more variations of armies, you don’t have to buy anything more than one set. 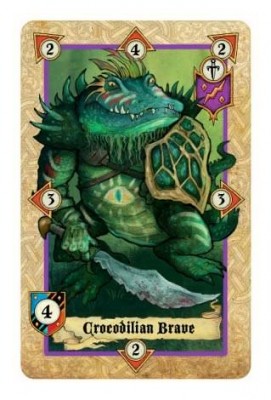 Lords of War treads a perfect middle line for theme. If you want setting, there’s tons of it: the cards are showered with fantastic artwork (the Lizardmen look especially great – see right), and there’s a whole section of their website dedicated to “The Lore of Lords of War” – with stories, maps, videos, audiobooks. On the other hand, if context is not your cup of tea, you can jump straight into the game and ignore it all: the mechanics hold up on their own.

The Weather and Terrain add on is a perfect example of this: for one camp they present a vision of an epic battle steeped in mist, as hail soaked archers struggle to visualise their targets… or to the more pragmatic players, your tactics need to adjust this round since ranged troops are ineffectual.

There’s nothing revolutionary about the basics: you take it in turns to plonk a card down on the table. You then work out if any card has been overwhelmed by attacks, and take them off the table. Your turn completes by bringing your hand back up to 6, either by taking a new card from your deck, or pulling a card off the table, if its not involved in the action. 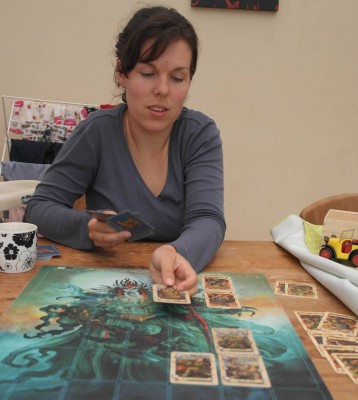 Its a simple system, and it lets you focus on the important stuff, namely taking as many of your opponents cards as possible (you need 20 to win) or just trying to destroy their leadership (take 4 “command” cards to win).

Some cards can do ranged attacks (think catapults, archers), some are very strong in attack, but very weak in defence (beserkers, or “suicide cards”). Everyone gets an identical range of ranks in their deck, from Recruits (weak, rubbish, cannon fodder) to your General (think John McClane).

Again, I feel Lords of War manages to hit the difficult middle ground here: tactics and strategy matter, but luck evens out the playing field too. There are real chess-like moments, when you put a card down, check the table closely, and move your hand away… seeing, just a moment too late, the Trebuchet you forgot about, with you directly in its line of fire.

This game is quick to teach, and allows new players to start getting tactical within the first game. I regularly “go easy” on new players, only to get halfway through the first game and find myself fighting for my life.

There are actually Core, Intermediate and Advanced rules, which allows you to slowly build on the complexity of the game with the more experienced gamers (read “Nerds”). That said, you can have a ton of fun keeping it simple – and that’s great for teaching it to people.

All the rules are on a single, double-sided A4 sheet. I have a few little criticisms: I find the rule sheet a little difficult for instantly grabbing rules from, and I’m not sure we play with the “extra” rules very often, but overall, this game is simple to learn, and great for introducing people to the hobby.

Whilst I enjoy reading rule books, visiting game shops and listening to hour long podcasts on topics like “Games with interesting mechanics”; my wife is much harder to tempt into playing board games than me. Yet, as we packed for our move to South Africa, it was she that insisted we bring absolutely everything with us, all 6 decks, the optional shiny cards, the full size felt backed gaming mat.

More than anything else, that shows how this game is a winner. I love it, my wife loves it, and everyone I’ve introduced it to has had a great time. Go buy it!

3 thoughts on “Lords Of War Review”