She was 13, and in some ways she was my best friend in the whole world.

In other ways, of course, she was a fairly idiotic creature, who only reluctantly and intermittently submitted to my authority over the course of more than a decade. 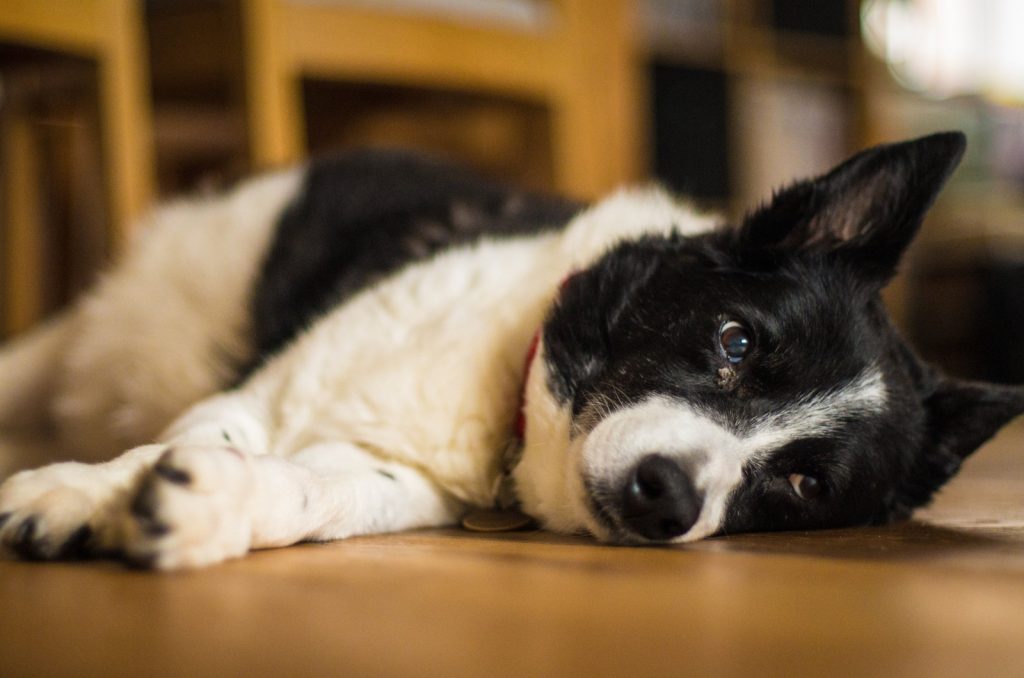 She used to open and raid the kitchen bin every night, and would then refuse to make eye contact when confronted about it.

She would regularly stand on the dining room table and eat butter directly from the dish.

On the day of our wedding, she ran away. Twice.

The first time was an hour before the ceremony. She decided to go paddling in the river behind the church, whilst wearing her red silk waistcoat (of course she was a bridesmaid, she’s my best friend!)

The second time she disappeared on our special day was during the reception, and this time she went missing for nearly 24 hours, returning to the community centre the next day with a ripped waistcoat and a clearly delighted expression at her night of unadulterated adventure. She ran away at least twice more on the honeymoon.

On the day we moved into our house in Boston, she ran so blindly and excitedly into our garden that she broke a cast iron bench with her head.

Once, on the night after eating a large turkey drumstick, she developed an incredible, volumatous diarrhoea that led to, and this is no exaggeration, over 40 individual clumps, heaps and pools of poo on a carpet in my bedroom. Of our rented house.

Eating, with a literally impossible speed, two entire batches of freshly baked still-warm mince pies, in the 1 minute that I left the kitchen. And then releasing, all night, in our bedroom, the richest, fruitiest, grimmest flatulence the world has ever witnessed.

Steadfastly refusing to stay on the grass, but instead running round and round the tarmac outside the basketball court until her footpads wore completely off, and spending a week struggling to walk with bright red feet. Then doing it again on about five occasions.

Accidentally falling in a canal, and then, on exiting, fixing us with the most intelligent grimace I’ve ever seen, one that transparently communicated the following sentence: “Firstly, its basically your fault I just fell in a canal, and secondly, how dare you laugh at me. This is not funny.”

To be fair though…

And yet, despite her patently (and unabashedly) criminal nature, she was a creature of huge affection.

The little furtive licks she would give you, unexpectedly. Not a licky, slathery ridiculousness like Pudding the Labrador gives. Of course not, Heze was above such things, but a quiet dab on the hand? Well that’s just good manners.

The grunts of displeasure she would give when Pudding tried to sit actually directly on top of her, but rarely actually growling: she wanted her personal space but not isolation.

The time she crawled under several chairs in the lecture theatre I was in (of course I took her to medical school lectures in the hospital – she’s my best friend!), and came up between the legs of the girl who was terrified of dogs, just to say “Hello!”

Endless moments of quiet presence. Under the table, in the car, beneath my chair, by the sofa, on-the-sofa-but-pretending-not-to-have-been on-the-sofa, on the bed, in-the-bed-when-Katherine-was-away… She was just there.

The way she rested her head against me today, even whilst breathing so fast, and so hard, just to press her nose against my leg.

Our family has lost a member 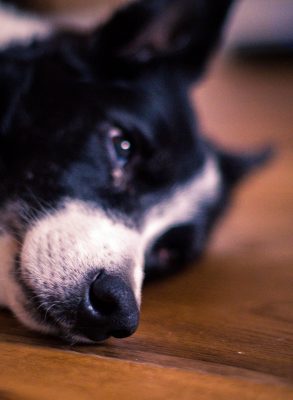 My children are heart-broken, obviously. Neriah reminded me this morning of one night when she was scared, so Heze slept in her bed (thanks for all the hair in the 4 year old’s bed, dog!). Joen, my eldest boy? His first word was “Heeeggggeeee!”. Or my youngest, Isaac, who immediately attached totally and completely to Heze, to the point that he learnt the word “Aggy!” on his first day with us. He still can’t say “Drink”, but he can say “Heze”.

I remember the time I brought our first baby human home. I sat the dogs down and said “This is Joen. He is one of us now. You need to love him and keep him safe”. Pudding, of course, immediately intrusively licked him, and then wondered if there was any food anywhere. But Heze just looked at him, and then back at me. She figuratively rolled her eyes. I knew, in that moment, that Heze was saying “Well of course. Of course I’ll love him, even if he’s undoubtably going to be just as annoying as all the rest of you. I’m Heze, that’s what I do”.

There are too many stories to tell.

Adding her to Facebook, her rapidly getting over a thousand friends, and meeting a stranger from a different Uni who didn’t know me but was already friends with Heze?

Visiting the Peak District, to experience Heze disappearing far out of our control to a distant peak, chasing exuberantly towards sheep, unable (or unwilling) to hear our yells. Or later trips to the Lake District, her training complete now, walking a metre behind me and not even looking at the woolly idiots nearby.

The first time she was stiff from running, and I realised she couldn’t live forever.

But surely she couldn’t actually get properly old, not really old, not… dying old? Who would love me unconditionally and raid the bin in the kitchen?

Of course she won’t ever not be around any more, I told myself – she can’t! She’s my best friend!

Heze lived a good (good being a relative term, in this case meaning “really quite naughty a lot of the time but loveable enough to more than make up for it”) life, and I’m glad she hasn’t had to suffer too much at the end of it.

I’m totally devastated right now, and I’m not sure if I’ll ever stop crying. Heze would think I’m being quite stupid, I’m sure. It’s not like something important has happened, like unguarded mince pies.

So there we go. Goodbye my good, good dog. Thank you for teaching me what unconditional friendship looks like. 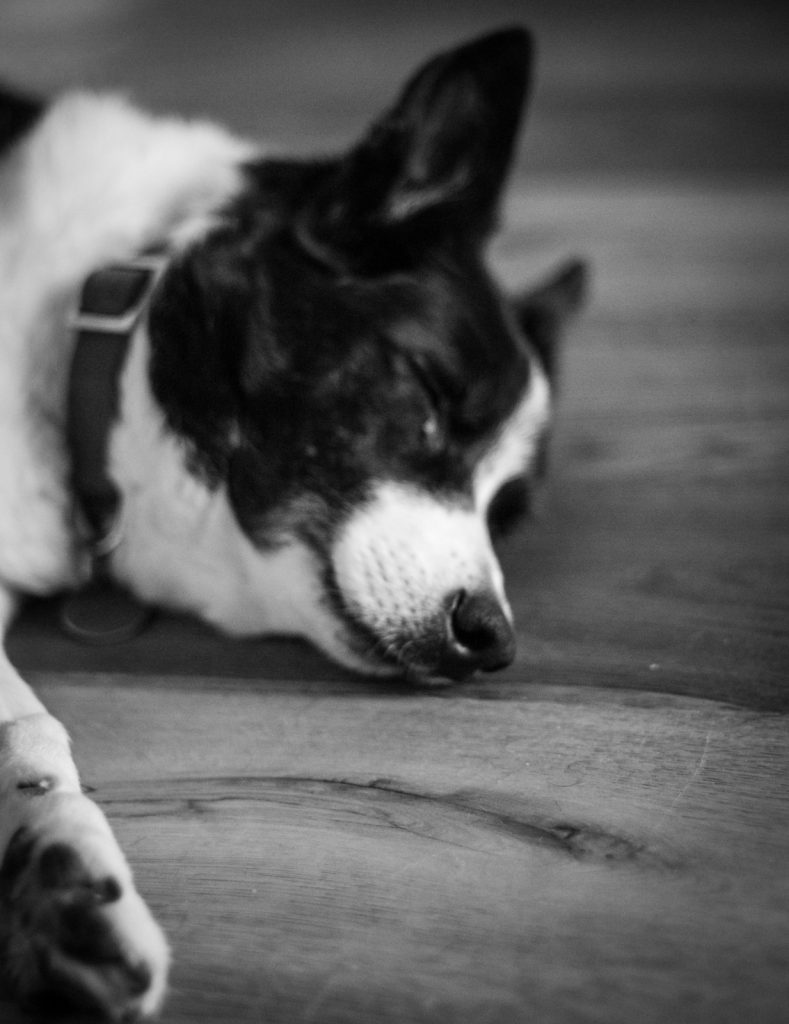 One thing that happened, early on with Heze, is that she gained a lot of names. Her full name was, in fact:

I know it sounds like I’m making it up on the spot, but I can rattle off that list in 20 seconds, and have done for years. I’ll finish by listing and explaining them, if that’s alright.

I had planned to name her after Hezekiah, the King in the Bible who “did what was right in the eyes of the Lord”. But then I realised, 3 days before getting her, that that was a boy’s name, so made it “Hezebelle”. For 13 years, people have said “Oh, like Jezebel?”. And for 13 years I’ve had to say, “No, I didn’t think about that”.

My friend Ste was a big part of my life in my first year at Uni. His first name became her second in honour of that – and her honorary birthday 3rd December is his birthday too!

Young Heze was insane. She had so much energy I’m surprised she didn’t explode. She chewed shoes, clothes, bedding, sofas, tables, chairs, cupboards, bikes. She was raging.

At university I stood to be Sports Officer at the Union. Heze was my mascot (Of course she was – she’s my best friend) and my pledge was to spend the entire Union Sports budget on pigeons. I was actually asked to stop campaigning by the Sports Officer because they were worried I might win! Obviously I didn’t win.

In 2007 we watched the film Bridge to Terabithia, and their dog is a faithful companion in all their adventures, known as “Prince Terrien, Troll Hunter Extraordinaire”. This seemed like a noble enough name for Heze to adopt.

You could give Heze a huge, piled, sloppy, saucy plate of food, and she would wolf down the whole thing in seconds flat, somehow perfectly avoiding any hint of lettuce leaves. They might be licked clean, but they would still be there.

When Heze entered a room, it was hers. Sure, we might nominally be “in charge”, but only because she deigned to obey us. She was willing to fight for that corner, on occasion. Pudding’s first few days in our family were tense, at least until the Labrador realised her place far far far at the bottom of the pile. Whilst being a hugely non aggressive dog, Heze had one notable moment, when my parent’s dog Gracey tried to claim, quite understandably, ownership of my parents home – but Heze was having none of it. The arterial spray of blood from Gracey’s ear did settle that one…

My favourite colour. My dog. Of course.

I think this is when we got chickens, and a chicken pecked her in the eye whilst she was sleeping in the sun, and she got scared of chickens forever.

No idea! Lost in the mists of time this one.

Around the time of the Danish Cartoon Mohammed controversy I very sensitively named my dog after deities from five major world religions: Hinduism, Islam, Christianity, Buddhism and, of course, Die Hard.

During revision for my medical finals, I decided a bit of microbiology would spruce Heze’s name up a bit.

In around 2017, we visited Cadair Idris. At the lake halfway up, Llyn Cau, we were throwing stones in the water. Unfortunately, Heze got a little too enthusiastic at leaping into the air to intercept them, and managed to do so successfully. As a result, she lost 3 teeth, and we discovered our pet insurance didn’t cover dental work. (We later also found out it didn’t cover her heart failure, you know, the only time she was ever sick in 13 years. Pet insurance sucks!)

Yesterday, her penultimate day of life, we decided that Heze had entirely earnt this additional name. She was lovely.

Today, after getting home from school, Neriah came to Heze’s bed and spoke to her quietly and honestly. “Heze, thank you for always comforting me”. It’s never too late for a new name, not even an hour before you visit the vet!

Of course Lowry. Heze was indisputably a member of our family, and we will always love her. 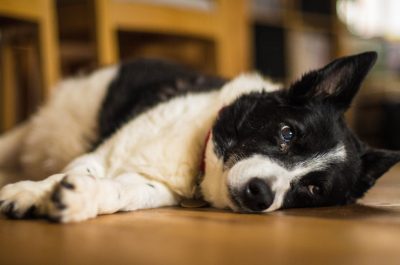