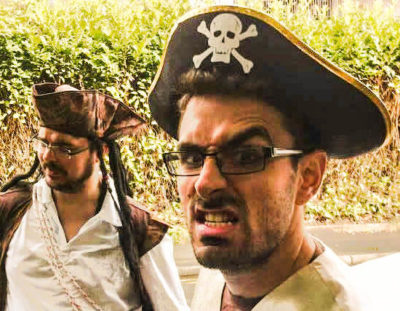 Last Saturday, I dressed myself in a waistcoat, popped on a jaunty hat, and asked my wife to apply my eyeliner for me.

Of course I did, because I was going to a Pirate Megagame! “What is a megagame?“, I hear you asking….

A megagame is a a room full of people all roleplaying as different characters, playing out some grand scenario. Imagine a combination of board game, role play game and hugely overcrowded dinner party with people that keep lying to you. 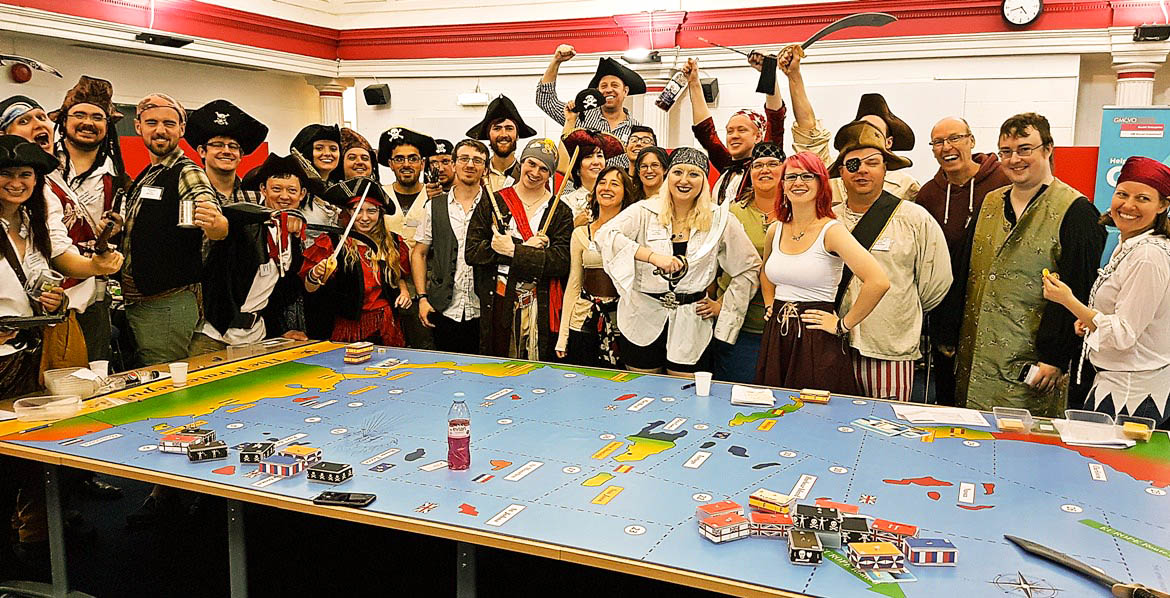 I’d never attended one, but I’ve been very keen on the idea ever since reading the Shut Up and Sit Down review of Watch the Skies. The amazing Pennine Megagames team have been running multiple games likes this for several years, and hearing about the Pirate Republic, it seemed time to put my oar in the waters…

The Pirate Republic was a one day swashbuckling adventure in Manchester, involving 60 or so fantastically well dressed players. The official description is below: 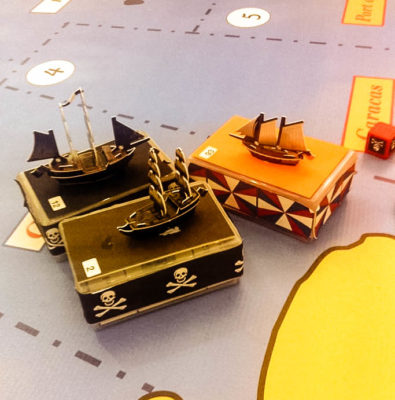 “The year is 1712 and the foul war of the Spanish Succession is finally coming to an end. Having fought for years, in some cases with honour, many fine sailors in the Caribbean find themselves unemployed and unwanted by their previous masters. Nothing to look forward to apart from poverty, starvation, scurvy and a miserable life.

So, do they roll over and die? No! They do what any self-respecting freedom loving sailor desires and follow the path well trodden by the buccaneers of old. Taking to the high seas, in fine ships stolen or borrowed from those who are better off, even sometimes bought, for a life of adventure, riches and partying until they drop.”

Basically, we got a boat, a crew, and the open sea, with ports to visit or attack (also run by other players), other pirates to attack and a mervant navy to hijack (run by a particular well dressed individual and his nation team). And we had to say “AAARRR!” a lot.

That sounds… weird. How was it? 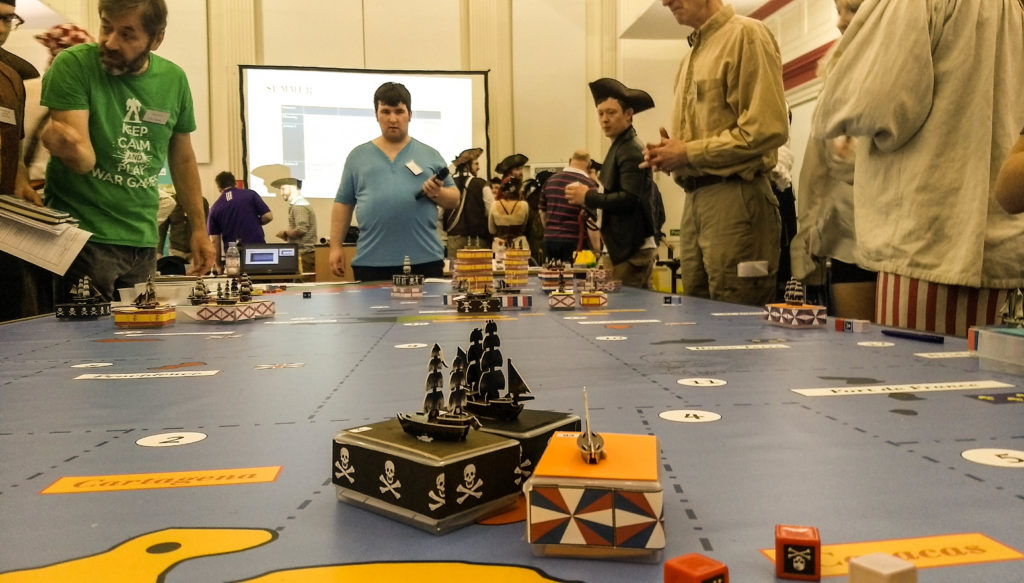 Firstly, megagames are, well, Mega. There are 60 different stories going on, countless plans, subterfuge and miscommunication. Nobody has a full idea of what is happening everywhere, and its easy to be completely out of the loop of huge swathes of action – but it doesn’t really matter! For example, we completely missed the battle for Nassau, the Pirate Island, we didn’t attack a single merchant ship, and only visited 5 out of about 30 ports.

Of the 70 players present, I estimate there were 30 people I didn’t speak to, and others who I heard of only through reputation. We faked a poisoning at one point, and spread the rumour simply by wandering up to randomers and telling them there had been a poisoning and wandering off. Yet, somehow, news of it spread to the very port we were trying to deceive without us telling them directly. Beckybecky just shared a brilliant blog post about her adventures on the day, and whilst I don’t think I was directly involved in any of them, its amazing how much of it I heard through hearsay, frantic whispers and glancing at the huge central board map.

There was an annual Pirate council, which was helpful for hearing about some of the larger plans and escapades, as well as the opportunity to stand to be the new Pirate King each year. I only stood for this once, and even I didn’t vote for me!

Secondly, plans will fail, but putting them together can be very satisfying. Your day will involve constantly, excitedly, talking to different people trying to scrape together plans, fervently promising to support your new friend to the bitter end, only for events to lead you to be at the other end of the map at the exact moment they said they needed you. But it doesn’t matter, because a different event meant their plans changed too – or they died horrifically, but who cares, they were only a scurvy pirate anyway…

We planned our grand poisoning and betrayal of Portabello colony intricately. This involved striking deals with other pirates to get them co-ordinated, getting the Control to agree to new rules for poisoning a water supply, and getting the Dutch colony to make us some fake uniforms for tricking the Spanish guards. Despite needing to postone the entire thing three times, we actually managed to pull it off, with the lovely guys on the Portabello table rather disappointed to discover that rather than allies we were just terrible, terrible people.

Thirdly, abandoning plans can be equally enjoyable. As the port of Portabello fell, the other pirates sailed to chase a Spanish galleon, whilst we were left to guard the new pirate port we had taken. Instead of this, we did a runner with all the treasure, hiding out in tiny French colonies for the rest of the year. We had multiple people coming to us asking what we did with the treasure, but disingenuously showing a blank face and feigning confusion created enough uncertainty for safety.

After a year in game had passed, our treachery was forgotten, and we sailed forth in our newly purchased and outfitted fleet, and tackled a single Dutch merchant vessel (seen in the photos above). Unfortunately, they fled, and were replaced with a newly built fleet from a nearby Spanish port… Portabello. We outgunned them effortlessly, but unfortunately ended up outmanned when we boarded them. Despite a heroic one-to-one duel with their captain, the Governor of Portabello, who died at our hands, we lost the battle overall, and our entire crew was executed…

Fourthly, there’s a lot of fun to be had outside the normal arc of the game. After our unfortunate demise, we reincarnated back as new characters in the same French port we had hidden in for a year. We decided the life of pirates wasn’t for us, so asked them if they had any potential terrorist acts they would like to see performed. They asked us to try to burn down a Spanish port. After a quick discussion with Central Control (who were getting a little exasperated by our constant requests for poisoning rules, hidden uniforms and similar) we came up with a plan. The French gave us a small fishing vessel, and we set sail as an unarmed ship to a small Spanish port… Portabello!

We sent Mike, our least vocal player to the Portabello table to haggle for hiring a warehouse for our (hypothetical) new fishing business. I knew they would never consider such an offer from me, as I had been central in the betrayal previously, but Mike won them over with his honest face and 3 remaining teeth. For one gold, they allowed us to hire a warehouse, and then we managed to buy an entire shipload of gunpowder from another colony. Port Control came up with a rule for the explosion, and we detonated the warehouse at the base of their fort, causing… not enough damage. We returned to the French to see if they wanted us to target any other colony: they gleefully gave us a handful of gold, and pointed us towards the current Reputation leaders, Havana.

The Cubans were so nice to us we (almost) felt guilty. Not only did they happily rent us a warehouse inside their harbour, but they even offered to buy fish from us! Central Control were too tired to be annoyed when we asked for a mechanic for getting fish, and just sighed at us “Whatever! Look, here’s a card for 3 fish, just have it and leave me alone!” Learning from our previous mistake of under-powered terrorism, this time we attempted to smuggle in three entire boatloads of gunpowder, then, after brazenly taking gold payment for our 3 fish, we called over Port Control for a further detonation. Little did we know that Cuba had also gone off piste, and had a card they’d bought from Central that made them extra vigilant against fire or explosions! We caused 50% damage to their fort, but two of the three of us were executed as a result.

For the final year of the game, our remaining living crew member returned to the French, and gleefully accepted a small bucket load of gold to buy and outfit a reasonable sized brig, and immediately set sail to the first battle we could see, where 4 Spanish ships were attacking a single Spanish ship that had recently turned pirate! Joined at the last moment by a captured Spanish galleon, we fought tooth and nail, sinking a larger frigate, but losing our own ship in the process. Overall, the pirates won the battle, and Ship Control ruled that our crew member survived, clinging to wreckage, as the final moments of the last turn ended…

We had a great day. It was exhausting – I literally sat down twice for a total of about 3 minutes in 8 hours – and I was very ready to be done by the end, but I’ve been left with amazing stories, and a feeling of having taken part in something much larger than myself.

There was definitely stuff that didn’t work: there were crew morale, ship gold and rum trackers that were rendered completely pointless within the first year. Some of our friends who attended found this quite frustrating as it rendered their initial plans pointless.

I suspect that most introverts would find the process a little daunting, and you need a willingness to accept “flexible” rules (ie. Control making them up on the spot). Despite any other issues, it was a unique experience, and I’d be very willing to participate in another one in future; just don’t make me play Portabello port!

Fancy taking part in a megagame? Visit Pennine Megagames and sign up for one today.
I may even see you there Matey! Aaaarrrr! 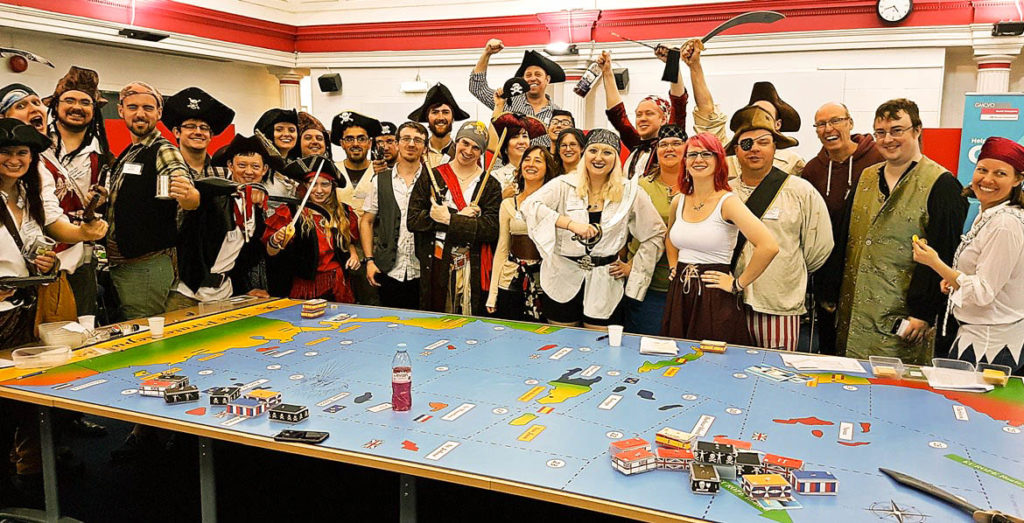 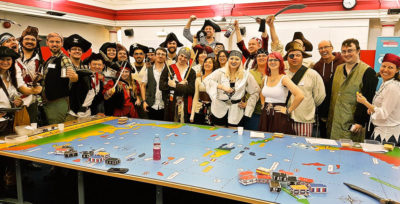 6 thoughts on “The Pirate Republic – a megagame review”