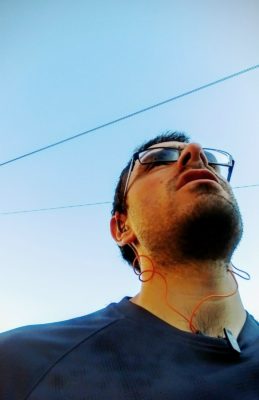 I’ve been steadily getting more interested in fitness, running, and healthy living. Over the last couple of years, I’ve lost a decent chunk of weight, and started running and cycling a lot more. I still sweat like a geriatric horse, unfortunately.

In the last 18 months I’ve completed my first Triathlon, my first 10K road race, and this weekend, my first Half Marathon… 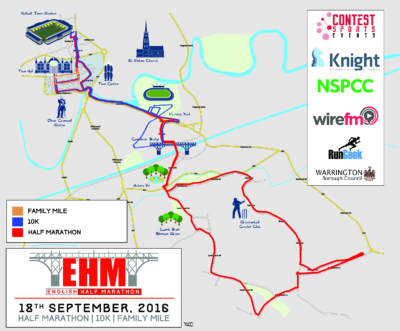 I pretty much got pushed by circumstance into doing the race. A newly fit, running enthusiast friend told me I had to sign up around 6 weeks ago, but it wasn’t until I discovered another friend was travelling over from Sheffield that I decided to give it a go.

Warrington’s slightly pompously titled “English Half Marathon” is a mildly hilly course with total rise and descent of 110m. Click the course map on the left for more details. Its 21km, obviously.

I did better than with my 10K. Not hard, because my training for that was close to non-existent. Sure, I didn’t run quite as much as I’d have liked, but I have been running at least 5km twice a week for the last couple of months, and I even did a training run of 16km!

As usual, 10 days before the race I rang my sports performance specialist friend Jon, asking “How do I train for an event that I should have already trained for”. He remained unimpressed with me.

I settled on trying to run 6km most days for a week, including one longer 16km route. Then, in the week running up to the race I ran 3 times:

Regarding nutrition, I planned to carb load on the two days before, and managed to suck down quite a lot of pizza. Unfortunately, my family caught a nasty virus that gave them nausea and abdominal pain. That hit me a little late on Saturday evening, but thankfully only hit me full force the day after the race.

On the morning of the race, I had two crumpets with loads of jam on them, approximately 80g of carbs, two hours before start time. That’s a bit less than the Runner’s World recommendation, but I was feeling a little queasy already. I also drank around 400ml of decaf coffee, keen to avoid dehydration, but also avoid weeing too much. I find that caffeine can make me feel nauseous on an empty stomach, so I felt it best to give it a miss…

It was a lot of fun. As has become my habit before parkruns, I started with the group behind where I hoped to finish, joining the 2 hour timing group at the start line. I did this for two reasons: firstly, I hoped their early pacing would be a little slower, and encourage me not to wear myself out in the first 3km, drained prematurely.

The second reason I like to start further back, is that I find gradually overtaking people throughout a race is a huge emotional boom.

Being fairly run fit, and concentrating early on my pacing was key to having a good time.

I kicked off at around a 4:45min/km, consciously slowing myself down, checking my phone for my pace fairly frequently over the first few kilometres. After that, I relaxed into the pace, and didn’t worry too much about going too fast, just used my muscle memory to keep me on track.

Just after 2km I needed a wee, and you can see my detour into Black Bear Park for a desperate pitstop on the GPS route (check the graphs and map further down the page). Immediately following it I sprinted to catch up, so probably made up most of the lost time, although the adrenaline hit was a bit draining. This coupled with my slightly upset stomach to give me some tummy cramps, but luckily a few sips of water settled this before it affected my pace.

The main uphill was between 3 and 8km, so things became a little harder work there, but I actually maintained my pace fairly easily. I got out the other side feeling pretty great – mostly because lots of people around me seemed to be struggling a bit, which helped competitive Chris feel like a winner. From 11km onwards, I felt very energetic, and clocked up 3 sub-5-minute-kilometres in a row. My legs started to cramp up a little from 17km onwards, but, by then, the end was in sight, and my brain forced me through (see me running the final 100m in the video).

Frustratingly, some little niggly plantar ligament in the sole of my foot decided to randomly go on the spritz around 19km. Like a lot of these things, it hurt a bit at the time, but didn’t properly flare up until the next day. 4 days later, its still hurting enough to limit me walking, which is also rather annoying.

Nutrition wise, I’m sure carb loading was the reason my legs retained plenty of bounce past the halfway mark. My glycogen stores only noticeably ran low towards the end. This was not helped by the placement of the carb gel stands on the run – I got one gel at around 7km, and didn’t get another one until I hit 18km – waay too late, although I managed to grab some powerade (off the floor) at around 14km which probably helped a bit… 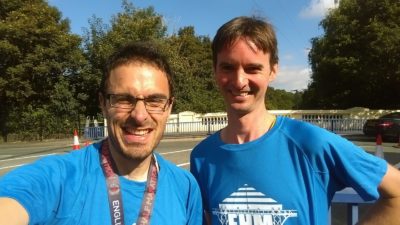 I had no particular expectations, nor any frame of reference for this run. One of my sponsors refused to pay up unless I beat 2 hours, so that was my key motivation. Using the Runner’s World Race Time predictor from my 10K result, I was given an estimation of around 1 hour 43 mins. (Although this does assume appropriate training for the distance…)

All in all, I had a good time. My thoughts on the event are marred by the fact I still can’t walk due to the foot pain, and I’ve been in bed for nearly two straight days with a stomach bug. That said, I think I’m a long way away from ready for a full marathon. My next plan is to do a bit more trail running, perhaps another 10K race, and see where to go from there.

As ever, most importantly, I got to eat 5 mini pizzas following the race. Win.