Almost late today, which meant we failed to do the proper British thing of sitting in the same place every day. The front row seems like a scary place, and I’m further from the toilet too. Not much I can do about that, so it’s time to pay attention. Today started with Vicky Lavy discussing how the course is acredited, and all the  exciting repercussions of the new UK revalidation process. After this, it was time for… 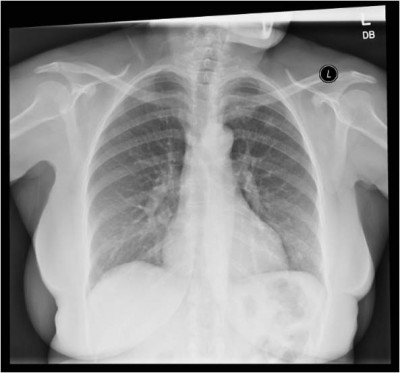 Our first talk of the day was by John Day, who spoke yesterday. By telling us that between a third and half of the world’s population have been infected with TB, he warned us that it was likely to be relevant to all of us, regardless of where we are working in the world.

Fuelled by the HIV epidemic, disproportionately affecting the poor, disenfranchised, and hard-to-reach group, and steadily become resistant to many ABx, TB is a unique problem. Taking 6 months of a combination antibiotic is an enormous challenge – I can appreciate this, since I have never successfully completed a 7 day course myself, generally missing out between 1 and 6 days worth.

Generally an intensive phase of HRZE (Isoniazid, Rifampicin, Pyramidizine, Ethambutol) lasting two months, followed by a continuation phase of HR for 4 months. This changes in areas of high resistance to Isoniazid, etc.

Untreated TB has a mortality rate of 60%. Treated well 90% will survive (almost all from TB, fatal hepatitis from treatment is incredibly low). Relapse rates are less than 5% with current treatment regimens.

Ideally, daily observed therapy is the best way to ensure good adherence. If unavailable, checking colour of urine is useful tool to confirm Rifampicin use.

You have been asked by the National Treatment Programme of Bolivia to describe the impact of TB-associated stigma and make recommendations on how to reduce it. How will you respond?

You are the infection control committee of a 200 bed district hospital in India who have been investigating a number of recent cases of TB amongst hospital staff. What measures would you recommend to reduce nosocomial (in hospital) transmission?

You are a team working for the Zambian Ministry of Health, with a large aid budget to develop joint TB and HIV services. What will be your spending priorities? 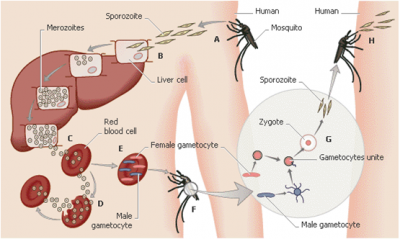 After a cheeky biscuit break, we return to learn about Malcolm Molyneux’s endless admiration for the dashingly intrepid malarial protozoa.

A very complex diagram explaining the pathogenesis and cycle of Malarial disease was put on the screen. Malcolm proceeded to (briefly) rhapsodise about each stage. I struggled to take it all in, but I have included it on the right – click for a larger version.

The commonest cause of human malaria is P falciparum. The most reliable blood test in the developing world is a thick blood film, which is most sensitive for confirming presence of infection; thin films allow positive identification of species.

Interestingly, in the UK, an asymptomatic phase of disease is very uncommon, since there is no innate immunity. The well documented sickle cell trait protection against malaria reduces serious disease, but doesn’t stop individuals developing symptomatic disease. Young infants are relatively protected from malaria with maternal IgG, and by presence of fetal haemoglobin.

A very worrying property of Malaria is that it can develop into severe illness very rapidly. Uncomplicated malaria is simply a febrile illness, clinically indistinguishable from other causes.

Fatality rate is 10-40% – the more of these three present, the worse the prognosis. Hypogylcaemia worsens prognosis but can be treated. “Black water fever” is black urine that occurs due to haemoglobinuria, generally accompanied by renal failure.

4 Ophthalmological signs of severe Malaria (tying in nicely with yesterday’s Ophthalmology session): this is a helpful confirmation of diagnosis, rather than diagnostic in of itself.

Treatment is based on your local policy of antimalarials. Generally an Artemisinin Combination Therapy (ACT), since they are faster than Chloroquinines, generally given as a dual therapy with an older remedy, to try and reduce resistance: there is none evidenced yet.

Quinine is still used widely – it is very cheap, and there is only moderate resistance. It is less effective than Artesunate, with roughly 40% higher mortality in severe Malaria, but still effective. Impregnated Bed Nets is a valuable tool in Malarial control, alongside a number of useful tools in the relevant country’s National Malaria Control Programme (if they have one).

There is an optimistic but worthwhile aim to eliminate Malaria worldwide within 40 years. 40 countries have eliminated it, but 80 remain with active transmission. e=mc2 : Elimination = Money x Commitment2 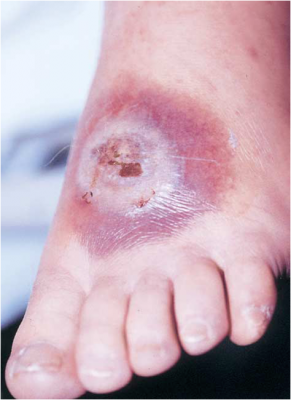 Lunchtime came, with the chef actually making me a vegetarian option for the first time today. After this we began a futher 3.5 hour session with John & Malcolm on the entire field of Tropical Medicine.

Man aged 42 years, French professor from the DRC. Admitted to hospital with poor concentration, insomnia, emotional distress, unable to cope. Had been tortured in the Congo, escaped, spent a year living in the jungle, managed to escape to Canada.

We covered a vast number of horrible little things, including cysticercosis, tapeworms, hydatid disease, liver flukes, roundworms, hookworm, trichuris, ascaris. I did not take notes on these, because much of it went straight in one ear and out the other. However, when I asked John, his advice was:

You need to know the common burden of disease in your area, common presentations of those parasites, and what medication is available. Ideally, you should back up all cases with a laboratory diagnosis.

Malcolm then taught us a little more on Malaria, but I’ve put this above with the rest of the Malaria teaching, to stop things getting confusing, but then moved onto another species that he holds a concerning amount of love for…

The live in snails that live in reeds on the waters edge. If you swim at least 100 metres out, you will be okay. Probably. If you get infected, you will know, because you will get a “Swimmer’s Itch” – this is the irritation from the larvae wiggling through your skin. This itch is worse with non human shistosomes, since the larvae struggle in vain to get through the skin.

From there, they head to the lungs, to breed. You can get a bit of a cough, depending how many of them went in through your skin. They then head to the liver as they are growing. The whole wonderful journey takes several weeks.

The liver is the Gretna Green of Schistosoma. Two worms pair up, and remain extraordinarily faithful for their remaining 3 years, always by one another’s side.

They then pass eggs continuously out of your body, causing calcification in the bladder wall, and eggs in stool or urine.

The great majority of adult infections are asymptomatic. But rarely, there’s an abnormality, which can cause serious problems: