Many, many years ago, I had my first true encounter with the refreshing, hydrating glory of the “cuppa”. I won’t pretend to remember exactly when it was, although I suspect it was in my early teens, and I may have been spending too much time with my friend (and intrepid international explorer) Jon.

It happened something like this:
Jon: Fancy a cup of tea?
Me: Actually, yes I do.
[5 minutes pass, then, after taking the first sip]
Me: Ahh… That’s better!

And, indeed, better it was. The beverage that won us an empire – surely no cigarette to a dying man ever achieved so much, no heroin addict ever gained so much release from a hit as I do every single time from the day’s first cup of hot stewed leaves.

Following on since that brewful day, there have been so many moments of timeless memory, stapled into my grey matter with the cold steel of an “Ahh…”

The result of this is that when coffee was first mentioned to me, I responded like a 16th century Anti-Reformationist when asked “fancy some moveable type?”. In that I was rather unimpressed, stopping however, just slightly short of strangling and burning the coffee offerer (or cofferer).

And I felt my reaction was right; because how could it ever replace tea?! What I now realise (obvious as it sounds, and stupid as it makes me look) is that it doesn’t have to.

Coffee (and indeed, hot chocolate, bovril and battery acid) are just other options. And if, as I believe, tea is the king, then surely it needs some contemporaries to reign over. So to any one I’ve ever ranted about coffee (or battery acid) too – I apologise. Not only is coffee not evil, it can actually be quite nice too. (Although you won’t ever persuade me that a £17 coffee in Starbucks even comes close to the humble power of a 50p cup of well brewed tea in a builder’s cafe).

Below are some shots of me brewing and drinking some tasty coffee with the help of a traditional stovetop expresso maker – also known as a macchinetta (meaning “small machine“), or a moka express.

Might have taken me a while to get round to writing this post, but I got there in the end. In my defence, I actually wrote this on the flight home, it’s just taken me 4 days to getting round to downloading photos.

Posted in how to, me.Tagged coffee, hot drink, how to, Macchinetta, Moka, stovetop expresso maker, tea. 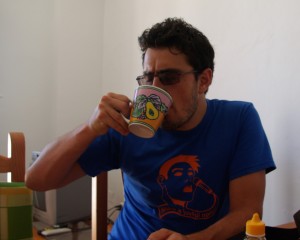